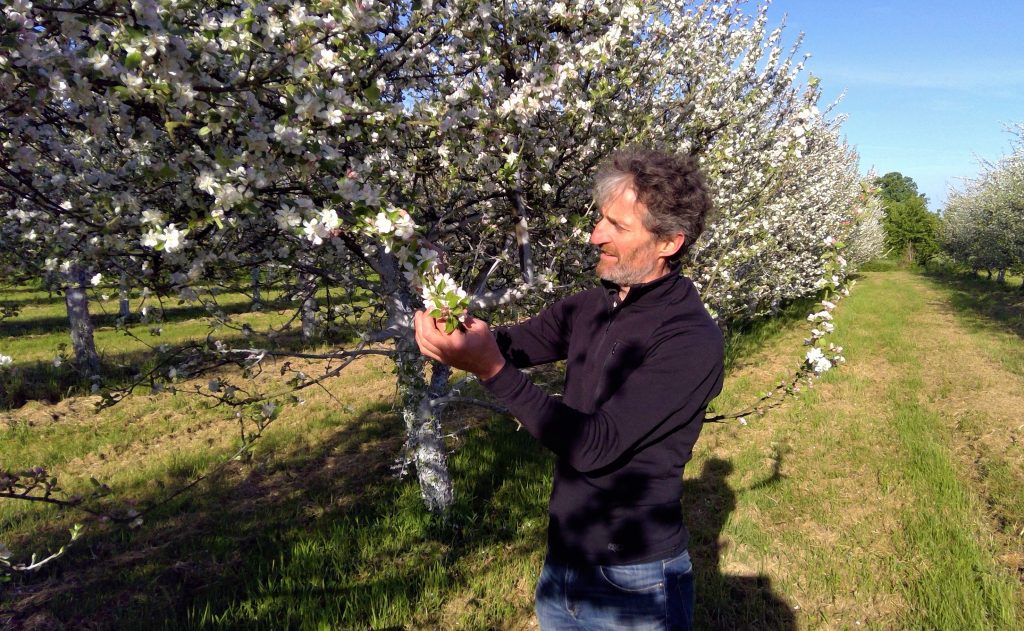 The father of Regis Tropée took over the Val de la Chevre farm in 1969 with a small orchard, 4 cows and a tractor. The farm continued to expand with the traditional mix of orchards and cows and Regis took over in 1997. The farm is located on the outskirts of Rennes in Brittany in the area called Pays de Rennes. Le Val de la Chevre is a certified organic farm and Regis has a small parcel of the trees dating back to 1945 but he claims that the apples are inconveniently early ripening and not his favorite variety. In 2005 Regis reduced his property size, ending his activity with cows and turned his full attention to cider production. His orchards are all planted with wide spaced standard trees in pasture. He has just recently introduced some Shropshire sheep to help with the “lawn mowing”. During the cider making process Regis avoids using sulphur as much as possible and employs instead CO2 and vigilantly guards against oxidation. He is among the very few (I know of no one else) who continues to pick the apples from the ground by hand. 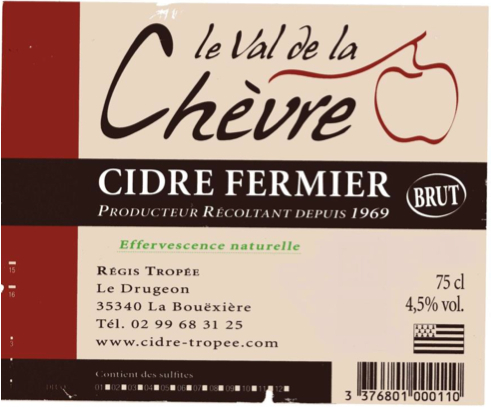 The cider is blended from at least a dozen varieties of apples with a base of sweet and bittersweet varieties. Regis also uses a good proportion of tart apples, which he says is important when using low levels of sulfur. Regis ferments his cider slowly at very low temperatures as he believes it allows time for the flavors in each tank to develop and also gives him time to better understand his building materials. After the cider is racked and filtered, it naturally finishes its fermentation in bottle over the course of a few months in a temperature controlled cellar.

The list of apple varieties grown in France is daunting with over 600 varieties having been identified. Over the centuries, apple varieties have been cultivated locally, so that from one small area of Normandy or Brittany to the next, the varieties of apples will change and thus so will the expressions of the ciders. The varieties are categorized by flavor type: tart, bitter, sweet, tart-sweet and bitter-sweet. Each cider producing area has developed a regional style based on their particular blend of flavor types and using the local varieties within each category... 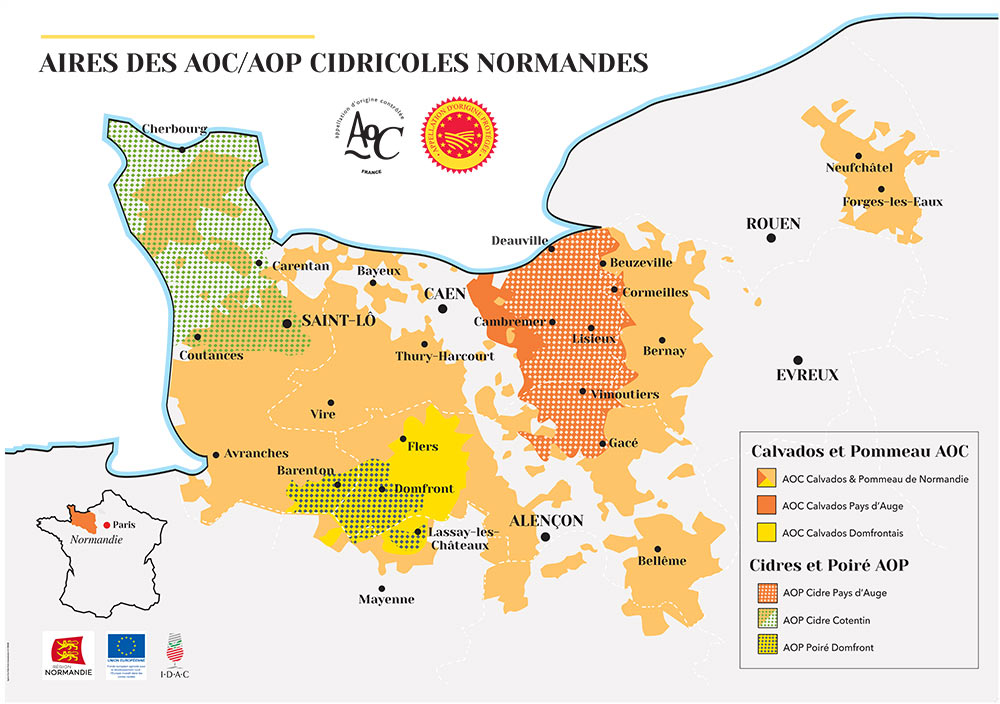 In the last couple of years Barbara and I have been attracted to wines with lower and lower alcohol levels and French ciders at 4% to 5.5% certainly meet that criterion. More importantly, though, the ciders that we have chosen achieve the difficult balance of our favorite wines, which is the combination of lightness and intensity. 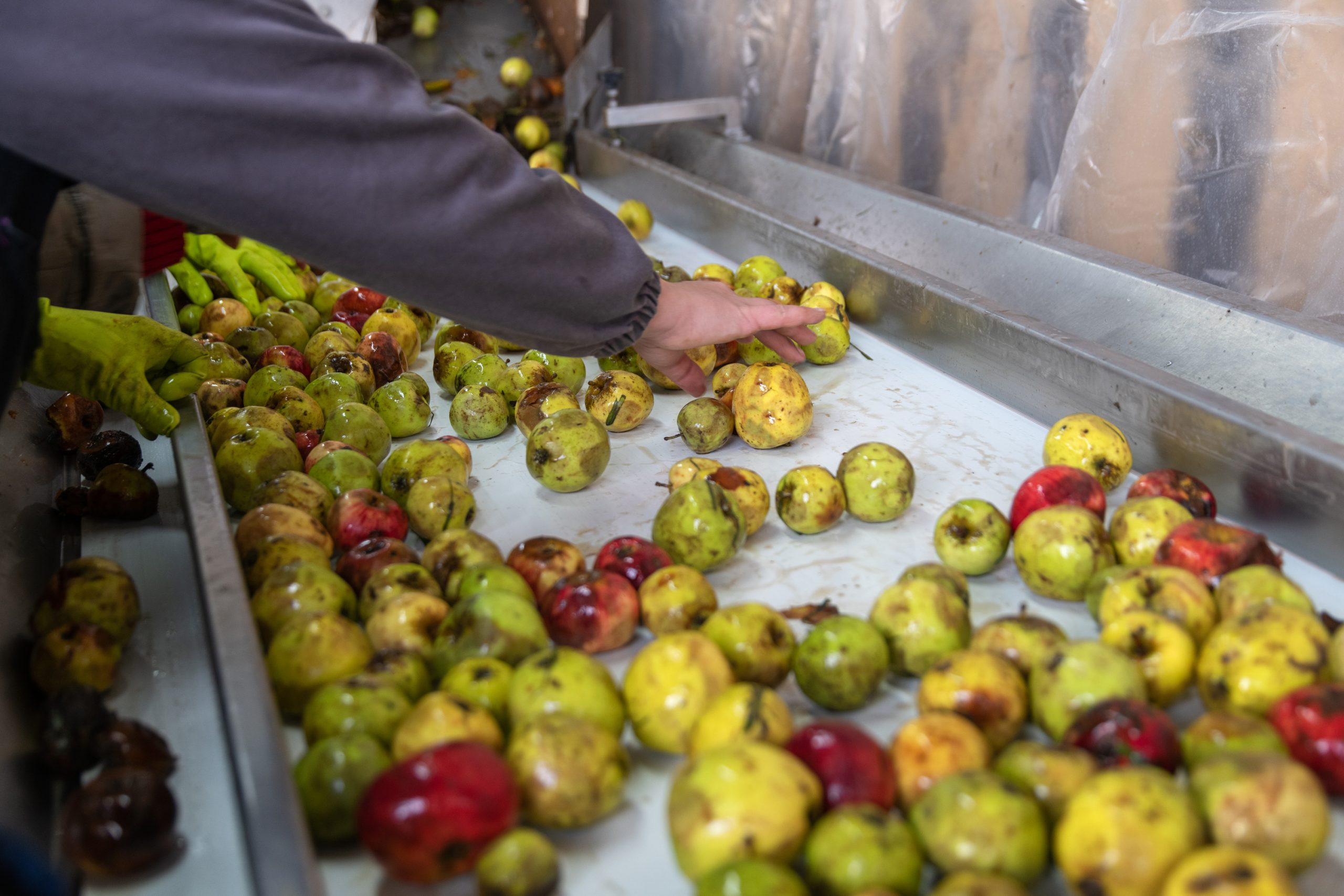 Happily, there is still a group of cider producers who want to make cider following the traditions of natural yeasts and without using either pasteurization or gasification. These are the producers that are passionately resisting the sterility of modernization and who merit our support.