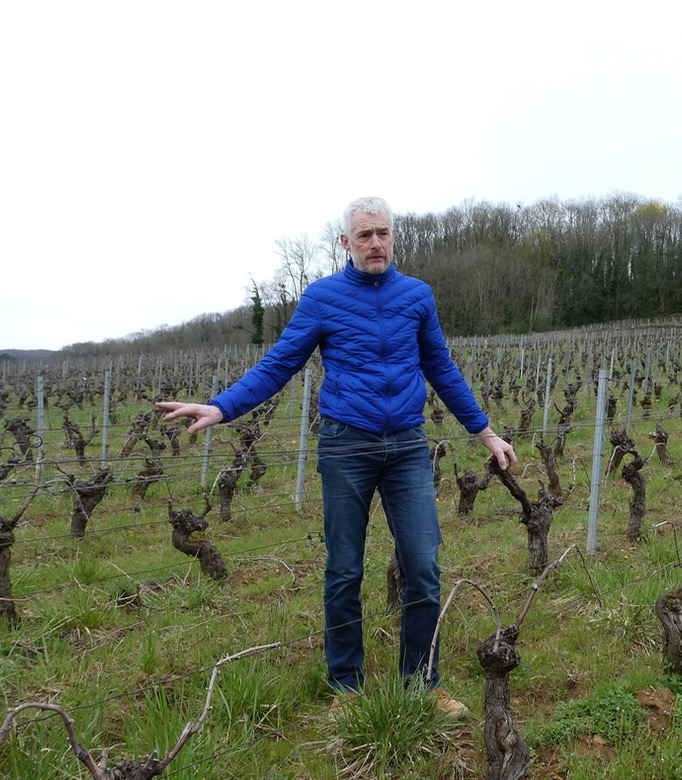 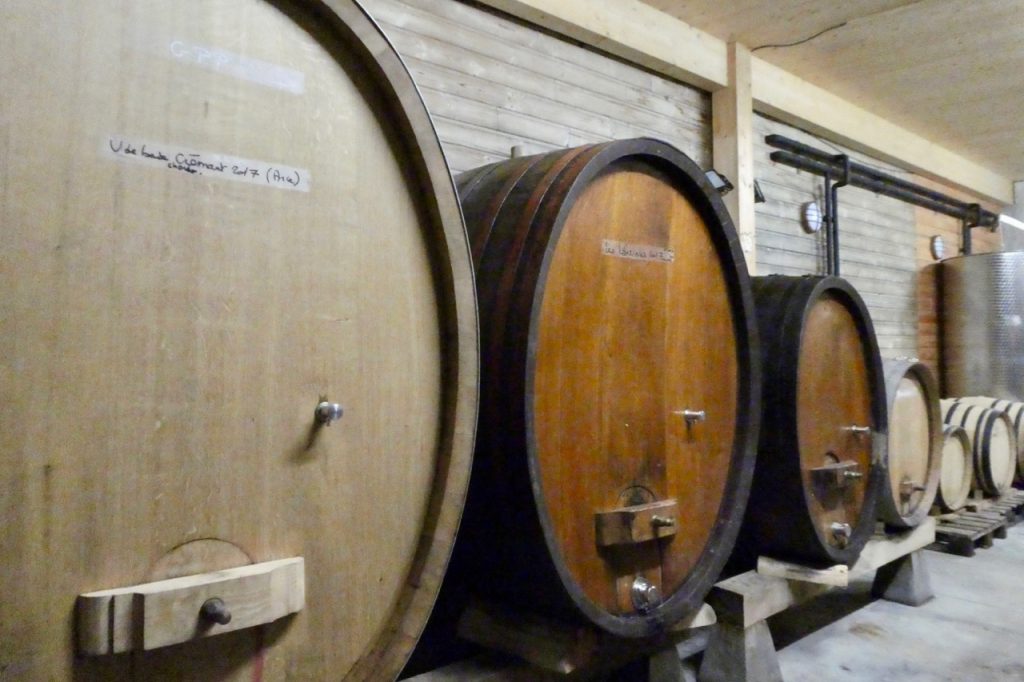 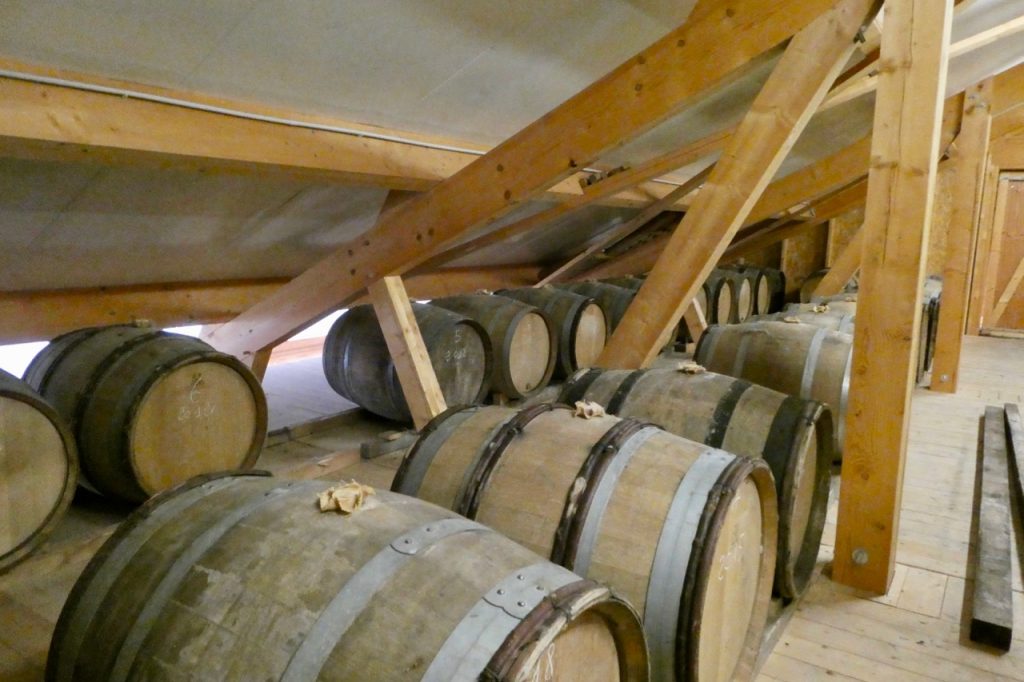 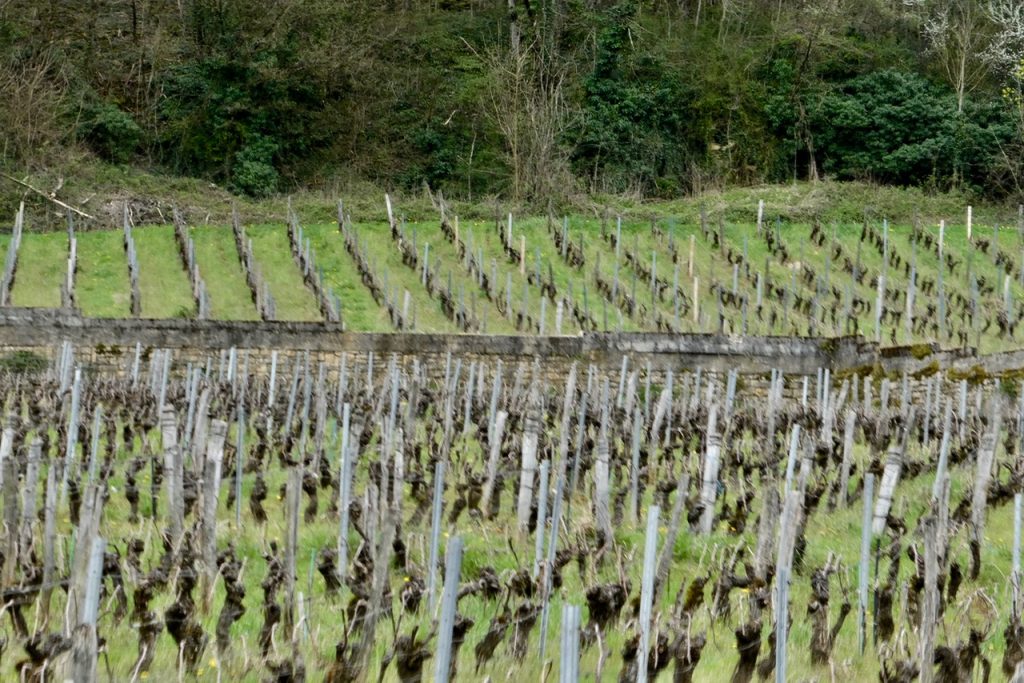 André-Jean and Héléana Morin own the 12 hectare estate, Domaine de la Touraize in Arbois, Jura. André-Jean is the eighth generation to farm in Arbois, a village which in 1936, was among the very first wine producing areas to receive AOC status from the French government.

The domain takes its name from a small parcel of vines on a steep hillside called “La Touraize”. This was the only parcel of vines that André-Jean’s grandfather kept after World War 1. André-Jean’s father expanded the family’s vineyards and continued his father’s practice of selling his grapes to the local cooperative. In 2010 André-Jean decided to begin estate bottling his production, and built a small winery on the edge of town. Each year, he produces more wine in bottle, with the goal of bottling 100% of his production. André-Jean’s 12 hectares are divided into parcels in many “lieux-dits” that surround the village of Arbois, including La Touraize, Les Corvées, La Flandre and Les Petits Curoulets. André-Jean began farming organically in 2016 and is in conversion to gain certification. With the exception of some young Savagnin vines, all of the vineyards are hand harvested. All wines are fermented with indigenous yeasts and the total SO2 in the wines ranges from 20mg/L to 60mg/L. 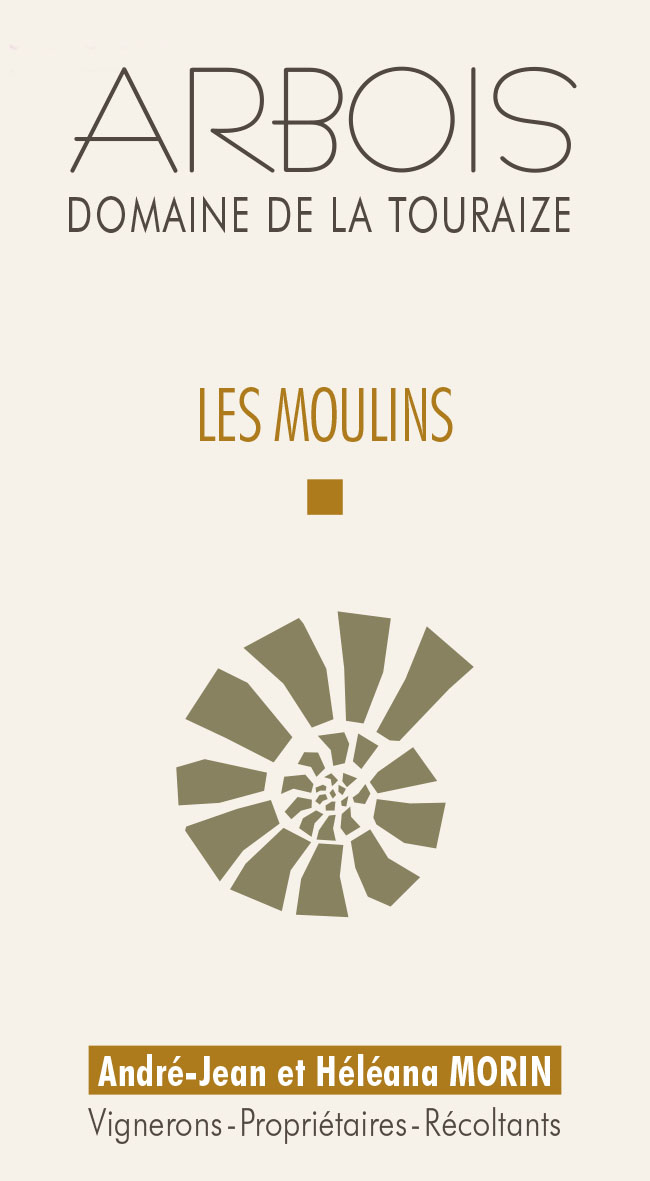 The cuvée “Les Moulins” is a blend of 65% Chardonnay and 35% Savagnin grown in the “lieu-dit” Petits Curouletson a soil of blue marl. The two varieties are co-fermented and thus harvested on the same day. The grape bunches are hand harvested and put into small bins to avoid any damage to the grapes. They are left intact and and gently pressed by a pneumatic press. The fermentation begins in stainless steel for 2/3 days after which the fermenting juice is put into 500L foudres to finish the alcoholic and malo-lactic fermentations.The wine is further matured in the foudres for ten months. The aging is “sur lie” with no racking or batonnage (stirring of lies). The wine is topped off every week. 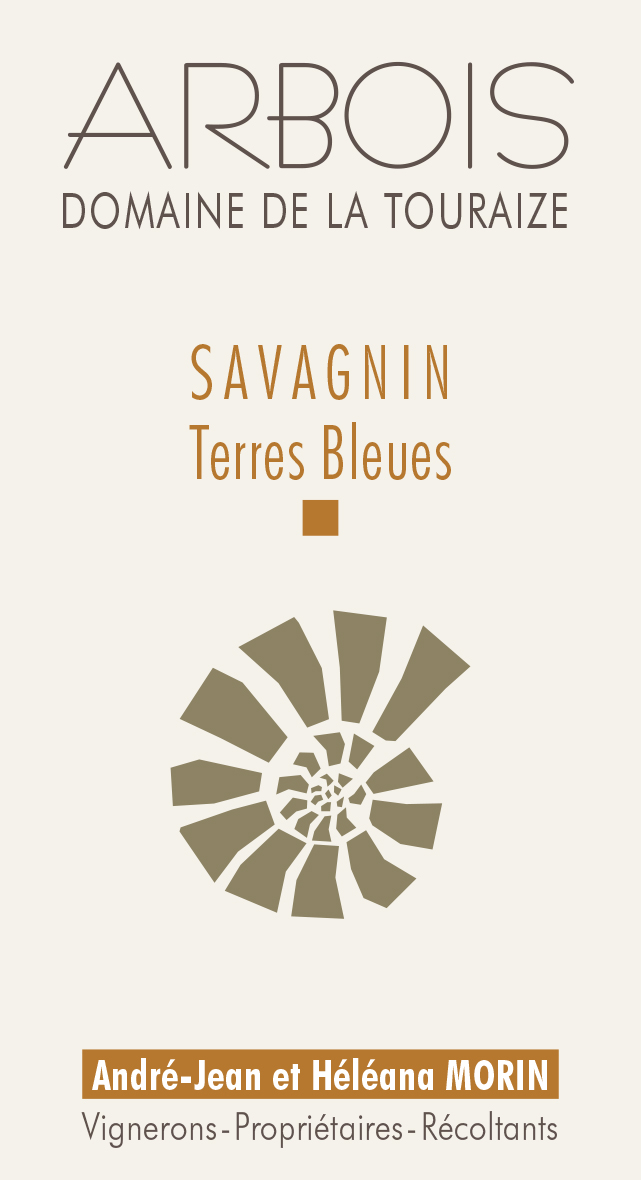 The cuvée “Terres Bleues” is produced from 100% Savagnin. It is made from young vines in the “lieu dit” Sur la Regole which give an average yield of 30hl/h. Savagnin is an old variety with origins in the Franche-Comté and northwest of France. It is connected to the Traminer grape which Jancis Robinson suggests is a clonal variation. It is also related to the Pinot variety. It is thick skinned, late ripening and acidic. The Savagnin bunches are hand harvested and put into small bins to avoid any damage to the grapes. They are left intact and and gently pressed by a pneumatic press. The fermentation begins in stainless steel for 2/3 days after which the fermenting juice is put into 500L foudres to finish the alcoholic and malo-lactic fermentations.The wine is further matured in the foudres for ten months. The aging is “sur lie” with no racking or batonnage (stirring of lies). The wine is topped off every week. 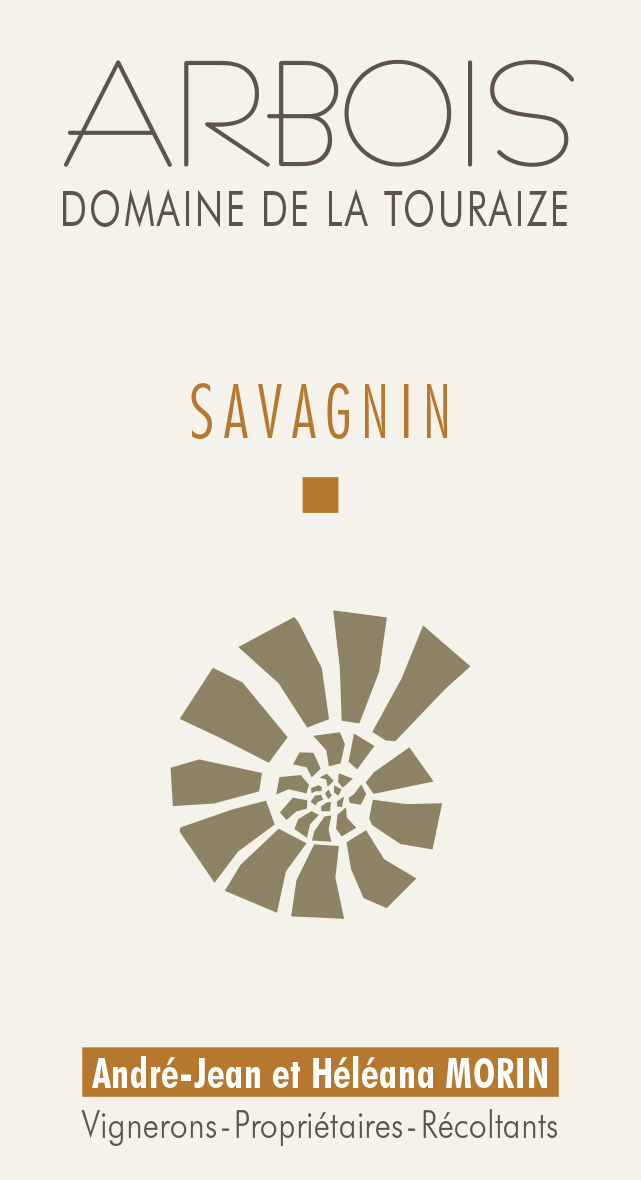 This cuvée is 100% Savagnin from 30 year old vines growing in a 1 hectare lieu dit "Petit Curoulet". It is made in the "typical" method of the Jura region, by which the wine is matured "sous voile", or "under flor", a film of yeast that forms on the surface of fermenting wine that is not topped off. The flor protects the wine from abrubt oxidation and the yeasts in the flor regenerate naturally creating a blanket which protects the wine as it matures very slowly (3 years) resulting in complex aromas and flavours distinctive to Savagnin. The soils of the Petit Curoulet vineyard are blue marl with a Northwest exposure. Grapes are hand harvested and gently pressed whole by pneumatic press. Alcoholic and malolactic fermentations are spontaneous by indigenous yeasts in stainless steel vats. The wine is aged for 30 months in 228 litre barrels in a non-temperature controled loft with no topping up. 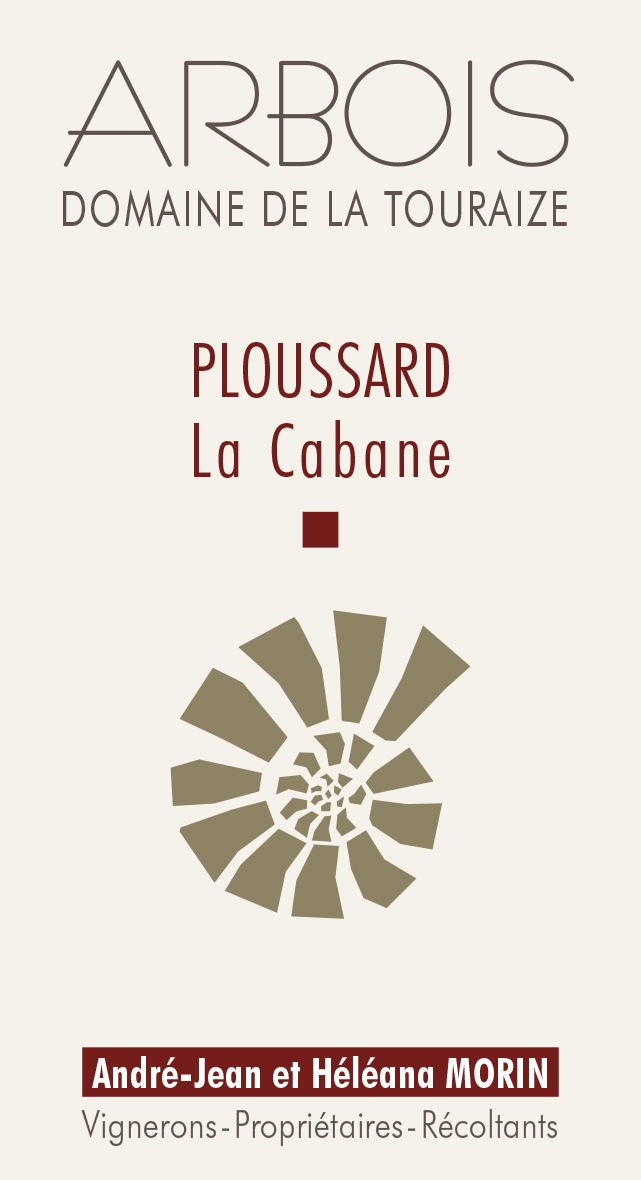 The Ploussard or Poulsard is an old variety from the Franche-Comté which is early budding, early ripening and well suited to the terroir of Arbois. The Domaine de la Touraize Ploussard is produced from two vineyards, the old family vineyard at “La Touraize” and a parcel in “Petits Curoulets” where there are remains of an old “cabane” which inspired the name of the cuvée. The average age of the vines in the two vineyards is 30 years and the average yield is 45hl/h. The grape bunches are hand harvested and then de-stemmed by hand to avoid breaking the skins. This allows André-Jean to put the whole berries into a stainless steel tank and have a semi-carbonic fermentation. The wine macerates with its skins for 18 days after which it is racked and then blended with the press juice. After assemblage, the wine matures in stainless steel for several months before bottling. The SO2 is 3g. 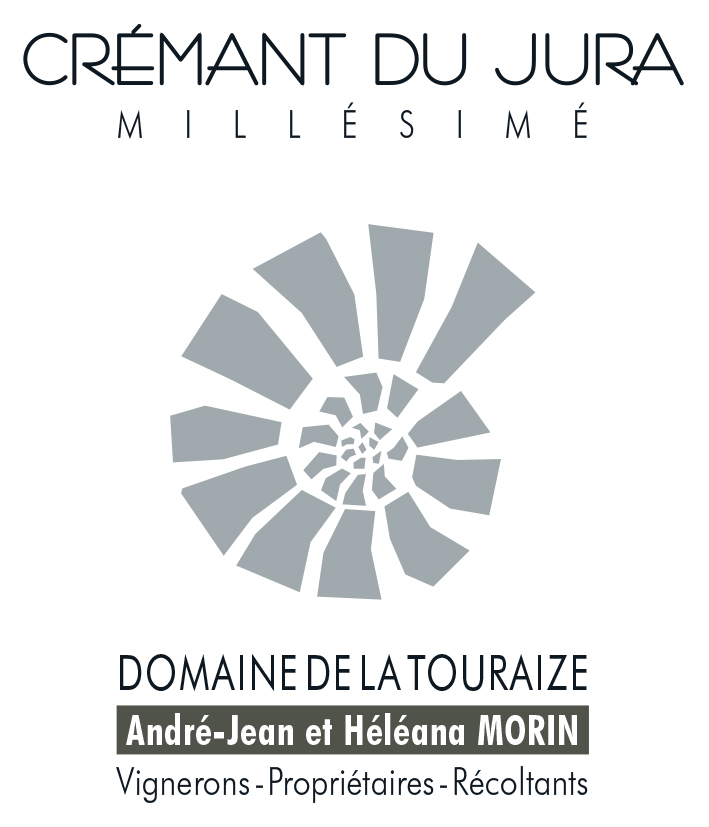 The Cremant is produced from 100% Chardonnay from 30 year old vines from a 1.6 hectare lieu dit "En Arce" of silty marl. The bunches are hand harvested and pressed whole by pneumatic press. Alcoholic and malolactic fermentations in are stainless steel and the wine rests there on its fine lees for 8 months. Once bottled, the wine spends 18 months sur lattes. The first month it spends on rack, riddled by hand twice a day, by a quarter turn rotation. Then, in tilting cages is rotated every 5 days. Dosage is generally between 4 and 5 grams.

One has to like a wine region where the traditional white wine is yellow, and the red wine is translucent and where conversation regularly turns to whether a wine was produced “sous voile” or “ouillés”. From Salins-Les-Bains in the north to Saint-Amour in the south, the Jura vineyards extend for 80 kilometers along a band of hills known as the Revermont. At the end of the 19th century and before the phyloxerra outbreak, the vineyards of the Jura covered 20,000 hectares. Today, a mere 2,000 hectares are planted. Most of the vineyards are planted at elevations between 200 and 350 meters and are sequestered from view from the main roads. The dominant landscape of the area is a mix of forest and cultivated farmland sprinkled with contented looking cows. Historically, the Jura was an important source of salt, but today it is best known for its cheeses. In fact, it is hard to be anywhere in France where Comté is not included on the cheese platter. Happily, in the past few years, the idiosyncratic wines of the region have made great progress in finding their rightful place at the table of the 21st century... 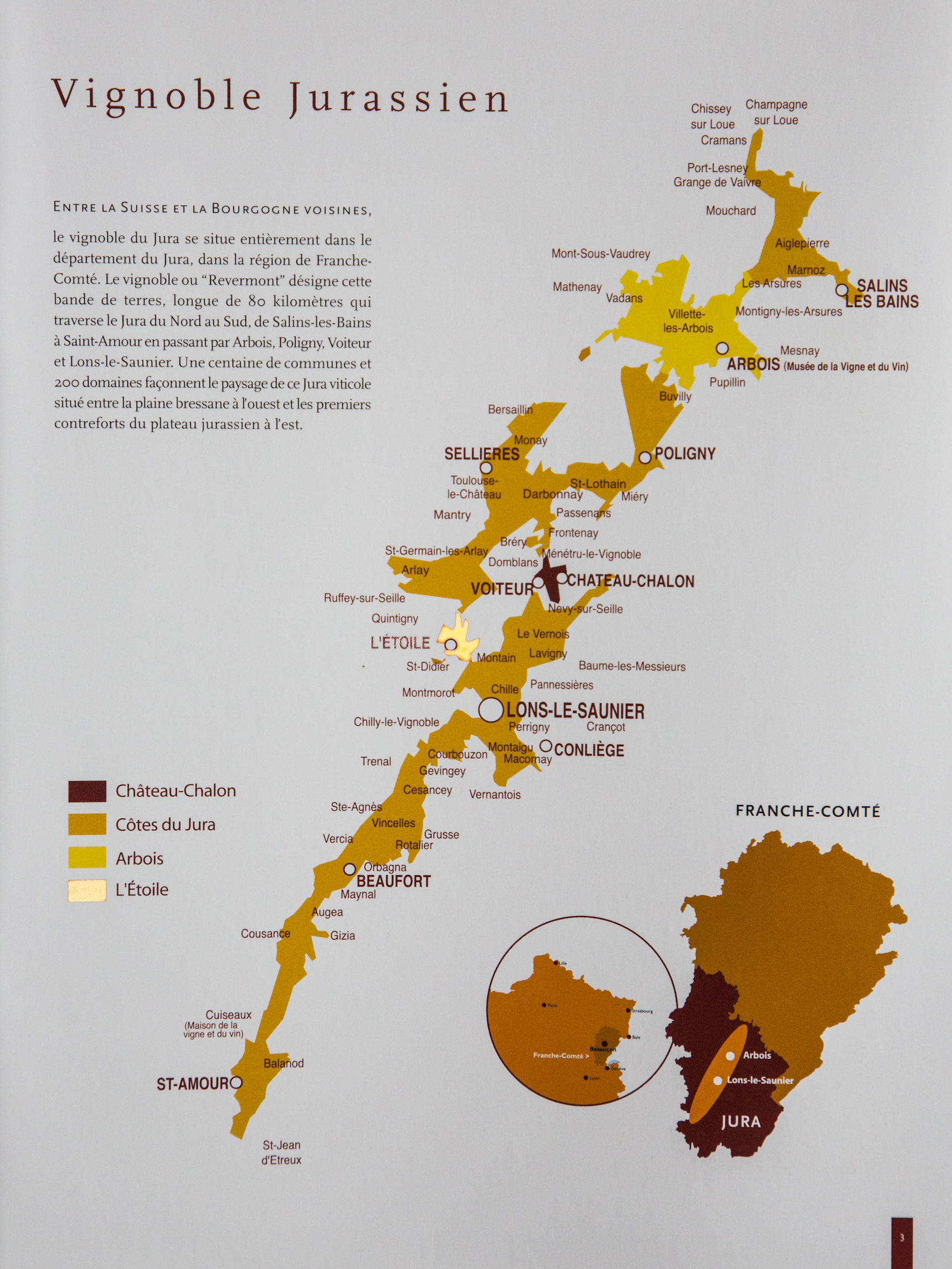 The wines of the Jura are produced from five different sanctioned grape varieties. Three are indigenous: Savagnin, Poulsard and Trousseau and two are borrowed from Burgundy: Chardonnay and Pinot Noir. I realize that referring to grape varieties as “indigenous” and “borrowed” is partaking in a kind of simplistic and revisionist history, but as is the fashion of the day around here, I am claiming “executive privilege”. At the end of the 19th century there were 45 different grape varieties growing in the Jura vineyards and the concentration on 5 varieties in the context of gaining AOC status is consistent with the narrative played out all over France. To digress, one of the most exciting recent developments in French viticulture is the replanting of “heritage” varietals and clearly the vignerons in Jura have a lot to choose from. The Jura vineyards are organized into four appellations: Arbois, Chateau Chalon, L’Etoile and Côtes du Jura. These appellations are overlaid by three “product-centric” appellations; Cremant du Jura, Macvin and Marc du Jura. It is interesting to note that in 1936, Arbois was among the first AOC’s to be recognized by the French government, a fact that would have made the town’s most famous son, Louis Pasteur, proud. The other three appellations received AOC status soon thereafter.

The Arbois appellation accounts for nearly half of Jura’s total production, and the small town of the same name is the hub of the region’s wine activity. The appellation extends to a few neighboring villages including Pupillin which can distinguish itself by hyphenating its name, Arbois-Pupillin. Chateau Chalon holds a legendary status, the only wine produced under this AOC is Vin Jaune. Its producers are held to the most rigorous standards, including a provision that can result in declassifying entire vintages. The 50 hectares of Chateau Chalon’s vineyards are spread across four communes with only certain parcels having AOC status. Those parcels that are not included fall into the Côtes du Jura appellation. The appellation of L’Etoile boasts 79 hectares spread across five hills and five villages. L’Etoile’s soil is rich in a star shaped fossil called “pentacrine”. So, what else could this village and appellation be called? The vineyards are planted primarily with Chardonnay and the appellation mandate covers only white wines, Vin Jaune and Vin de Paille, or as I prefer to say “white, yellow and orange wines”. The Côtes du Jura, in short, is an appellation that extends the full 80 kilometers of the Jura wine region, represents about 722 hectares and covers everything that doesn’t fall into the first three appellations. 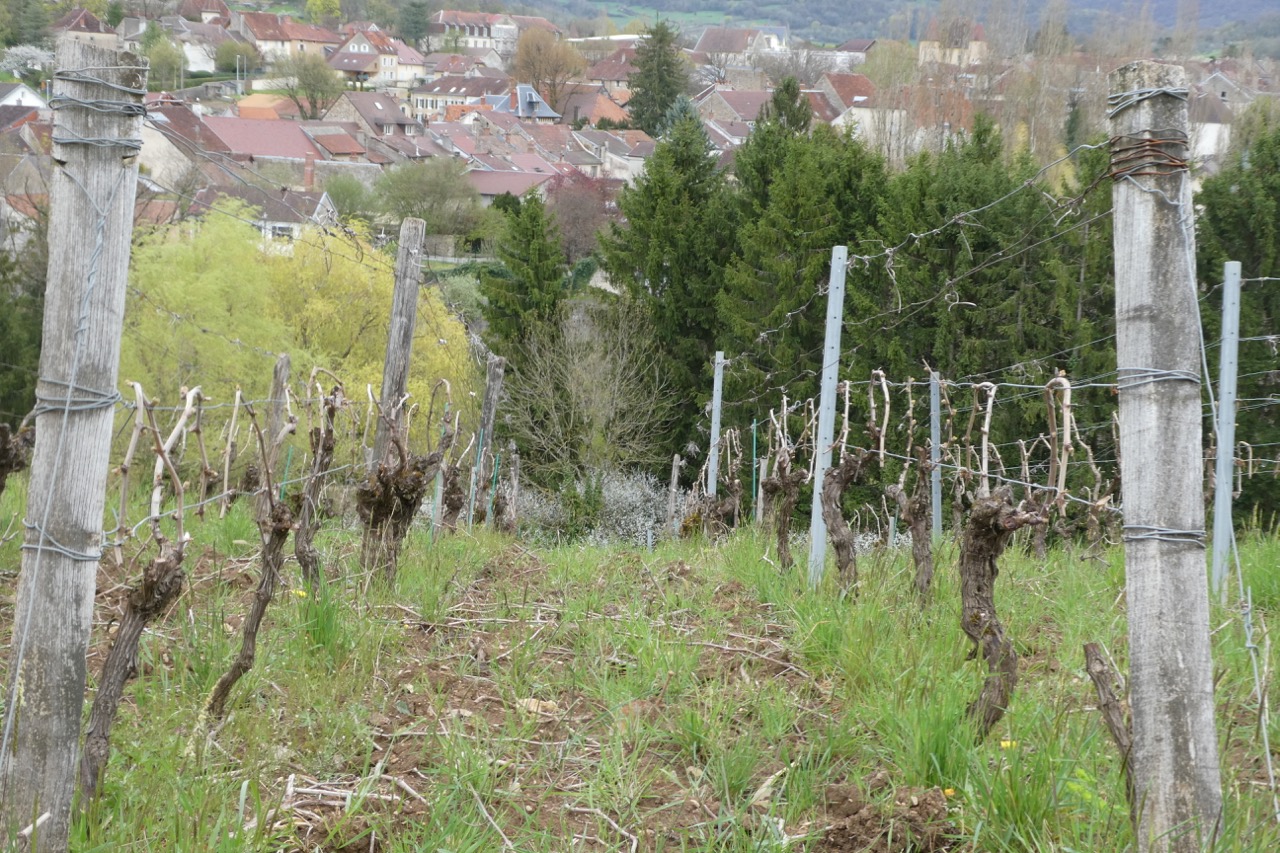 The younger generation of Jura’s wine producers are pivoting somewhat from oxidized white wines and blended red wines to white wines that are “ouillés” (topped up) and red wines that are produced from a single varietal. But it is the Vin Jaune that remains the patron saint of Jura wines. Its origin is shrouded in the fog of history, although from the 18th century forward the wine has been associated with the Benedictine monastery in Chateau Chalon which in that period was the provenance of female nobility. As they say, girls just want to have fun. Produced from Savagnin, Vin Jaune can not be bottled until six years and three months after harvest and spends most of that time in barrels, typically 228 liters, without being touched. A film of yeast develops across the surface of the wine, keeping it from spoiling. At the end of this long maturation process, the wine is put in bottles that hold 62cl of wine called Clavelin after the original bottle maker. Vin Jaune has long been considered among the world’s best wines and is able to age indefinitely which suggests a corollary with the farmer who tends her land for future generations. Vin Jaune can be a wine purchased by one generation for the pleasure of the next. An unusual selling point to say, “buy this wine and drink it in a hundred years.”