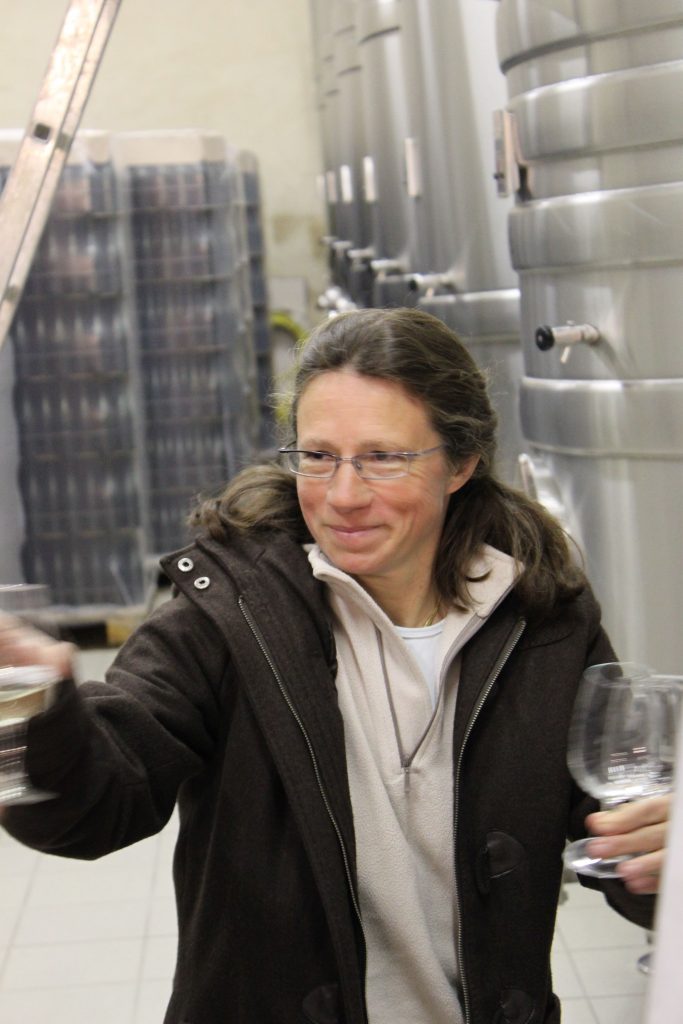 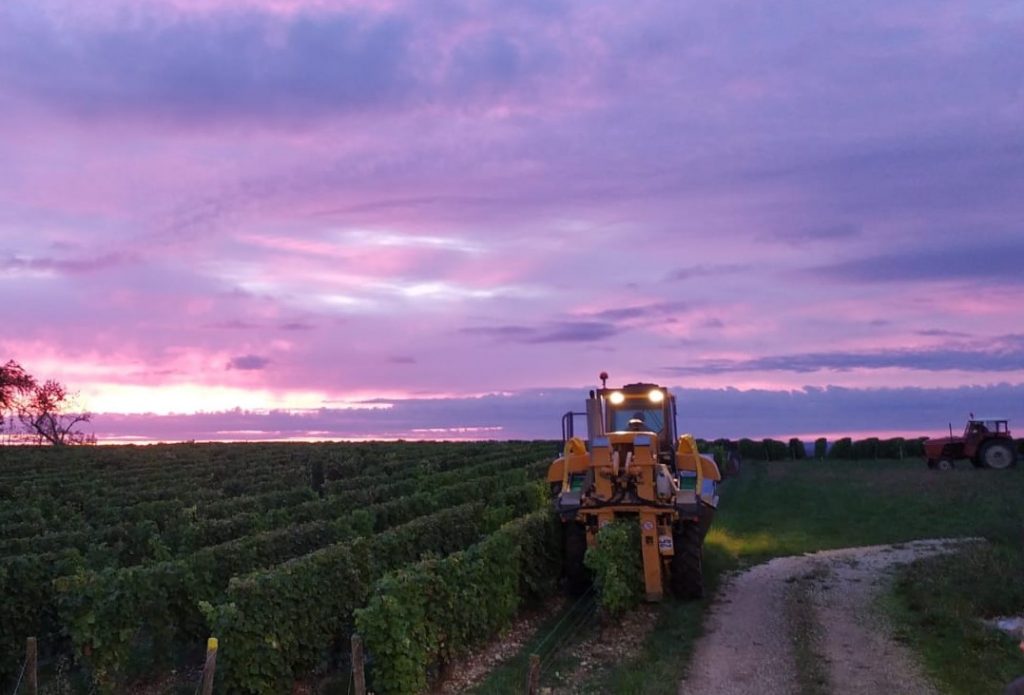 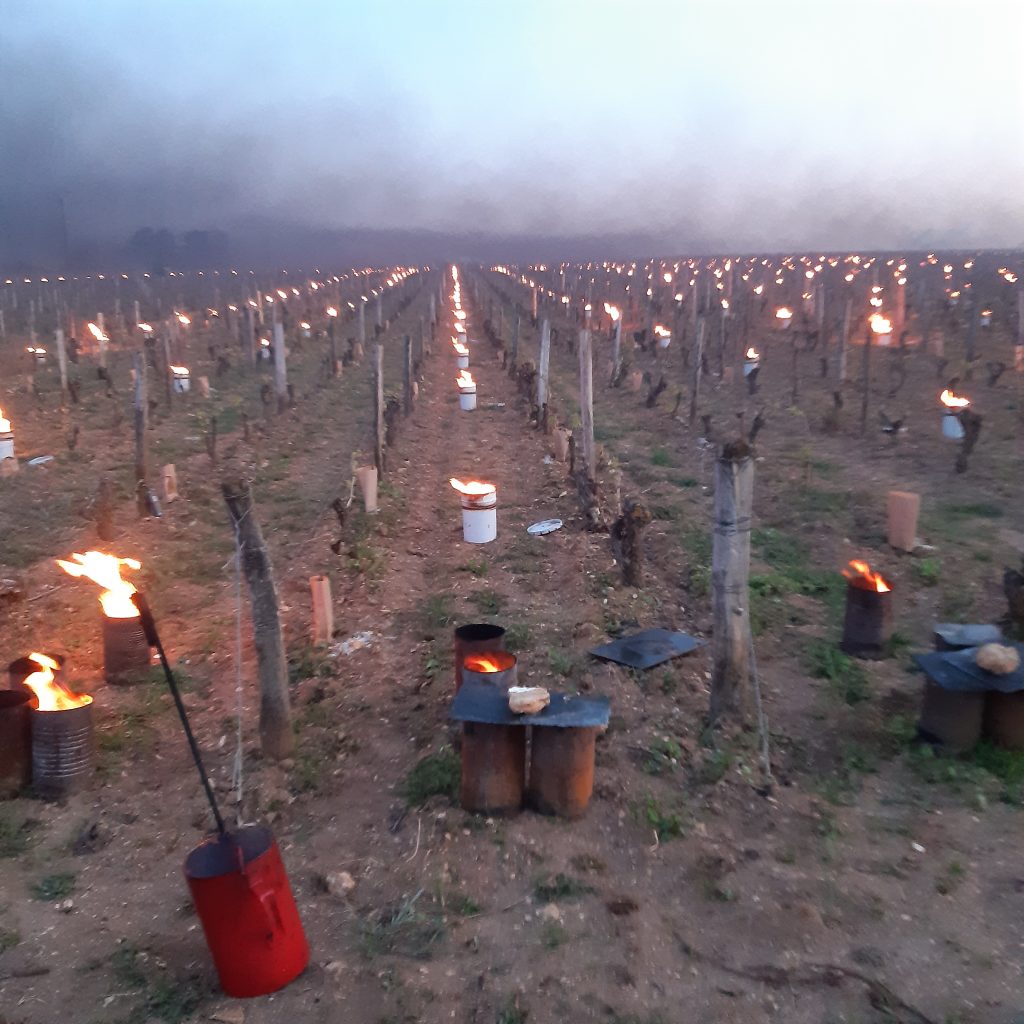 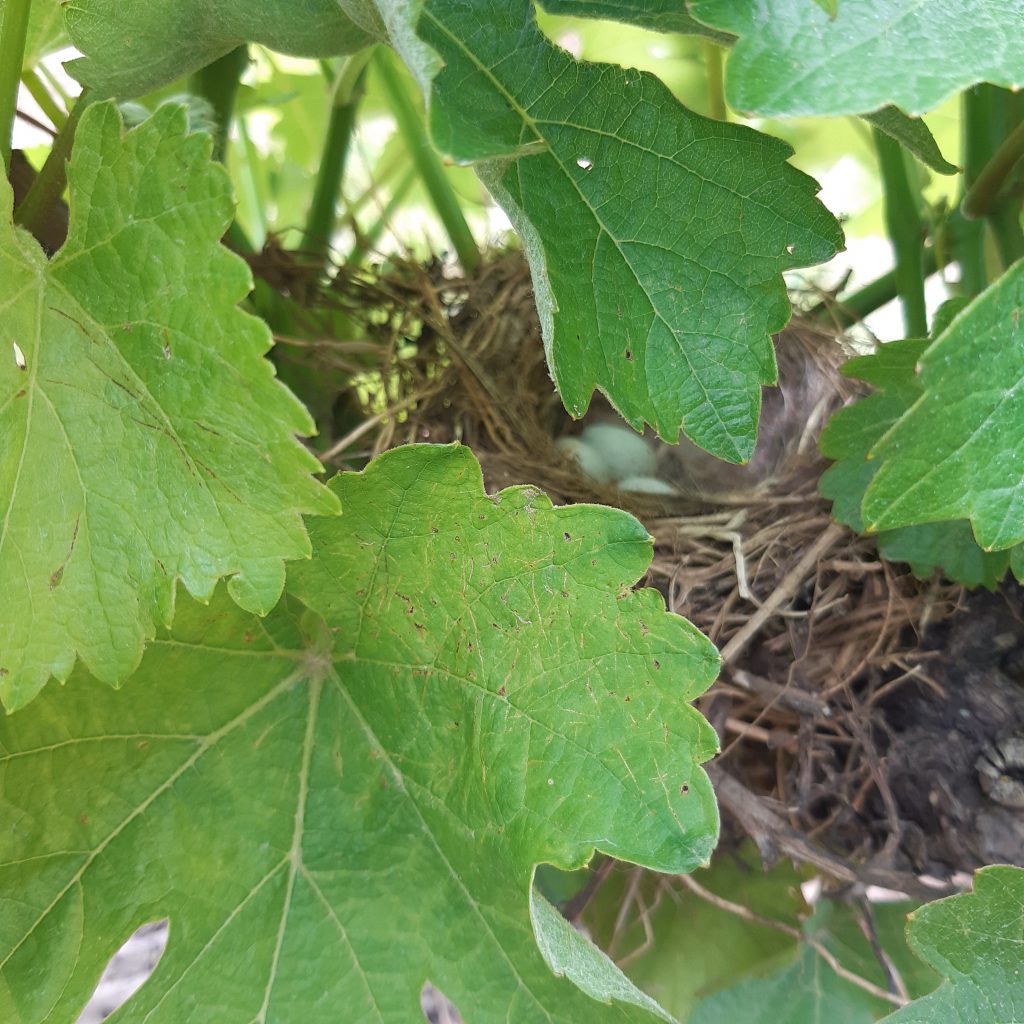 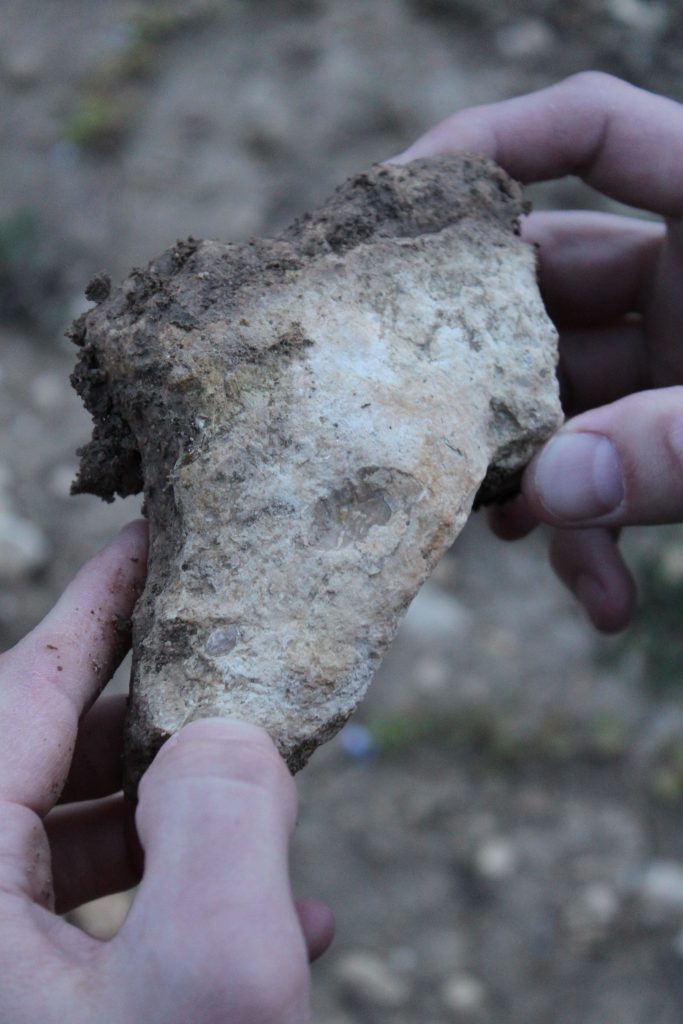 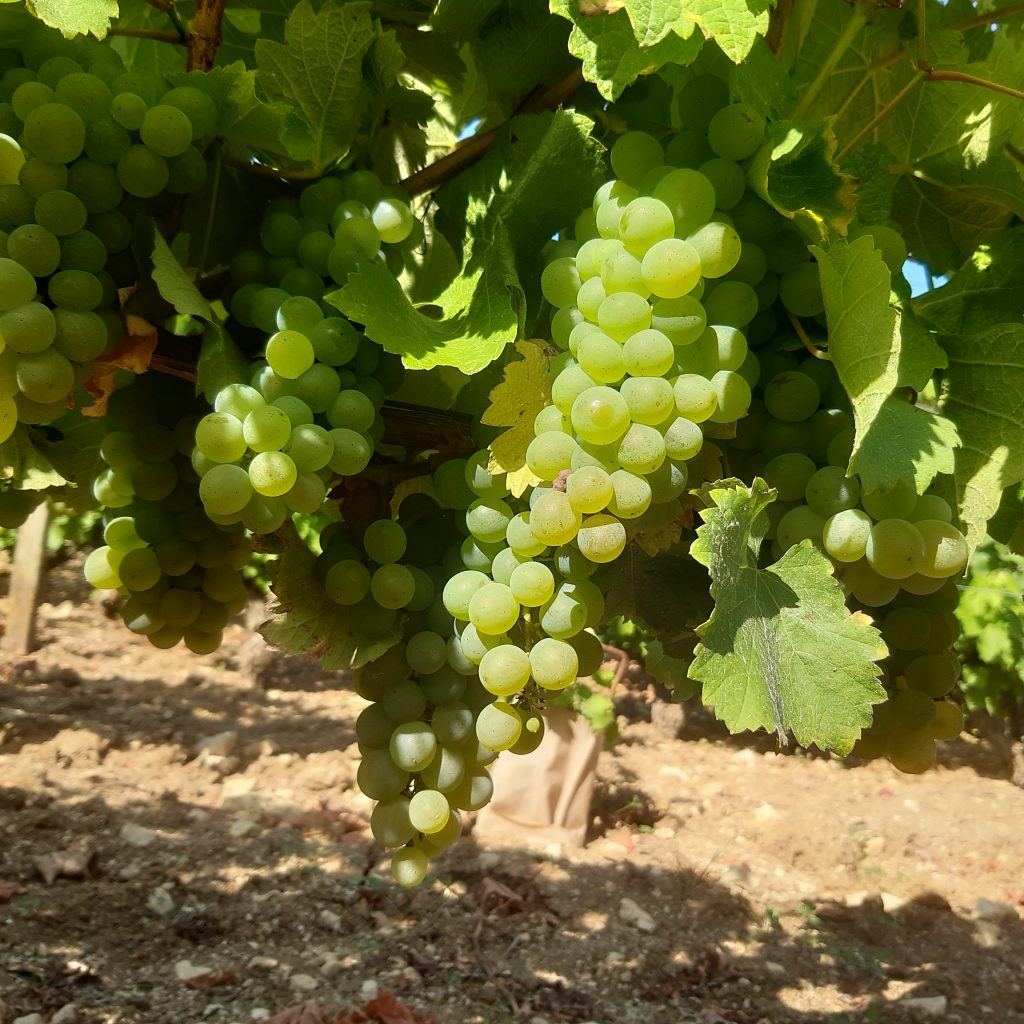 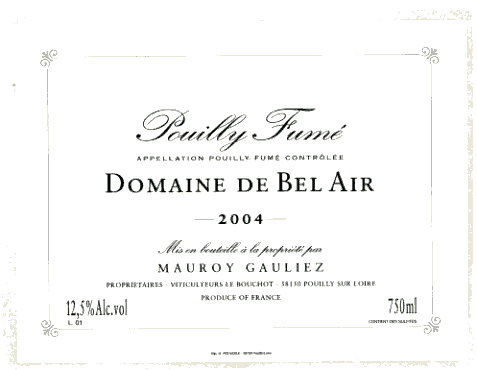 The Domaine de Bel Air in Pouilly Fumé is a family estate that dates back to the 19th century. It is now run by Gérard Mauroy and his two children, the eighth generation to oversee the domaine. Together they farm 12 hectares according to the principles of “lutte raisonnée or minimal intervention. Grass is planted between the rows and grape bunches are thinned during the growing season in order to temper the vigor of the Sauvignon Blanc. Their vineyards are well situated on hillsides that overlook the Loire and have good exposure to the sun. The soils types found in their different parcels correspond well with the three main types found in Pouilly Fumé, namely marnes kimmeridgiennes, argilo-calcaire called locally caillotes and sables calcaires. Vinification is carried out in temperature controlled stainless steel tanks after the grapes have been very gently pressed. The wine rests “sur lie” until bottling in April. In this way, the domaine retains the freshness and typicity of their Blanc Fumé.

The Loire River runs a course of 1,000 kilometers. This grandest of French rivers rises in the volcanic Auvergne mountains at 1551 meters in the village of Mont Gerbier de Jonc. It takes its course flowing north through the center of France and then westward to the city of Nantes, where it empties into the Atlantic Ocean. Along its way, the Loire River passes through thirteen departments and together with its tributaries, provides the setting for seventy-three different appellations. These seventy-three appellations fall within five viticultural regions: Auvergne, Centre-Loire, Touraine, Anjou-Saumur and Nantais... 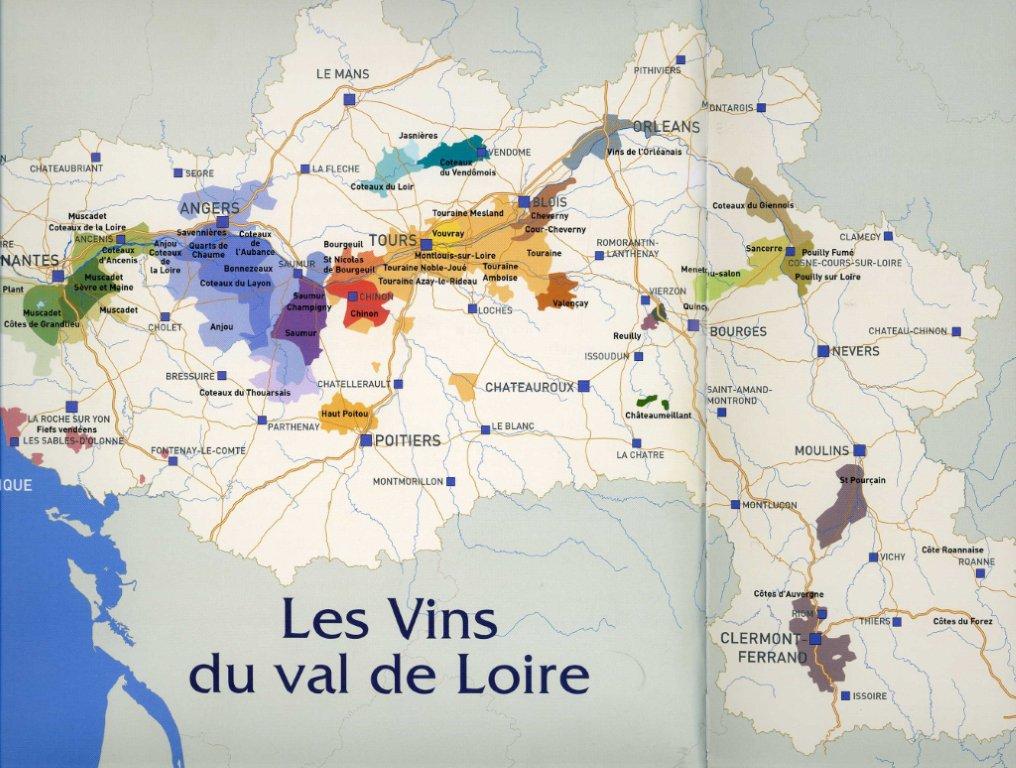 The most concentrated areas of wine production are found in these last three regions all situated on the upper half of the river and centered around the towns of Tours, Angers and Nantes.

The Auvergne mountains give birth to the Loire and present a rugged landscape quite different from the bucolic countryside of the upper Loire between Blois and Angers. The Auvergne vineyards divide into four appellations : Côtes du Forez, Côtes Roannaise, Côtes d’Auvergne and Saint Pourçain. Today they are little known beyond their borders but wine has been made there for over a thousand years and historically they enjoyed widespread recognition. The vineyards of Saint Pourçain were among the most favored in the Middle Ages, rivaling those of Beaune and Chablis and gracing the tables of the Royal Court and the Papacy at Avignon. The overall area under vine is much smaller today than it was centuries ago. Côtes Roannaise is the smallest with 170 hectares of vines and Saint Pourçain is the largest with 600. All four taken together would be half the size of the Sancerre vineyards. 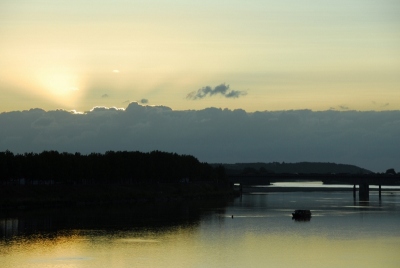 The Auvergne mountains are challenging to the viticulteur from the standpoint of topography and climate. The few vineyards that exist today are planted in the most favorable micro-climates. When the wines are well made they are extremely expressive and flavorful and give the impression of being rich in minerals and restorative, much like some of the “eaux de source” from the region.

The vineyards of Centre-Loire include the appellations of Sancerre, Pouilly-Fumé, Pouilly-sur-Loire, Coteaux du Giennois, Menetou Salon, Quincy, Reuilly and Chateaumeillant. This is the land of Sauvignon Blanc; only the appellation of Pouilly sur Loire produces wine from a different white grape, Chasselas. The Centre-Loire has the city of Bourges at its center. Historically it is a mercantile city, and from where originates the word “bourgeois.”

The vineyards of the Touraine extend in all directions from the town of Tours and are organized into thirteen appellations. Additionally, to the north of Tours is the Vignoble du Loir where the appellations of Jasnières, Coteaux du Loir and Coteaux du Vendomois straddle the Loir River (what’s an “e” among rivers?).

The vineyards are spread along the Loire’s many small tributaries such as the Cher, Indre and Vienne on the south side and the Cisse and Brenne on the north. These smaller river valleys render landscapes of human scale and infinite variety, perfectly mirrored by the wines. Wines labeled as Touraine can be produced from a long list of grape types. The authorized white grapes include Chenin Blanc, Sauvignon Blanc, Chardonnay, Romorantin and Arbois; the red grapes include Cabernet Franc, Cabernet Sauvignon, Gamay, Cot (Malbec), Pinot Noir, and Pinot Meunier. Four sub-appellations of Touraine, each spread about a particular village and named for that village, such as Touraine-Amboise, produce wines with a stricter set of mandates from the I.N.A.O. The wines of Touraine bring to mind the old Arlo Guthrie tune, “You can get anything you want at Alice’s Restaurant….”

The Touraine is followed down river by the wine regions of Saumur and Anjou. The vineyards here extend for many kilometers and are found primarily on the southern side of the river. Saumur is well known for its sparkling wine made primarily from Chenin Blanc. The natural and manmade chalk caves are like those in Champagne and provide the perfect repository for the maturing of the sparkling wine bottles. The separate appellation of Saumur-Champigny produces Cabernet Franc along the lines of Chinon and Bourgueil.

The Pays Nantais has its viticultural roots in the Roman era during which its proximity to the Atlantic Ocean provided commercial advantage to the region. However, invasions and political instability during the middle ages hindered the vineyards from flourishing. Not until the 17th century did the vineyards begin to prosper and expand thanks to the Dutch who used Nantais white wine to make Eau de Vie. The main grape of the area is the white wine grape Melon de Bourgogne, called locally Muscadet. Muscadet was widely planted in the early 18th century after the severe frost of 1709 wiped out most of the Nantais vineyards and showed Muscadet to be one of the only varieties to withstand the cold. Sharing the same viticultural zone as Muscadet in the Pays Nantais is the VDQS appellation Gros Plant which produces wine from the grape type, Folle Blanche.