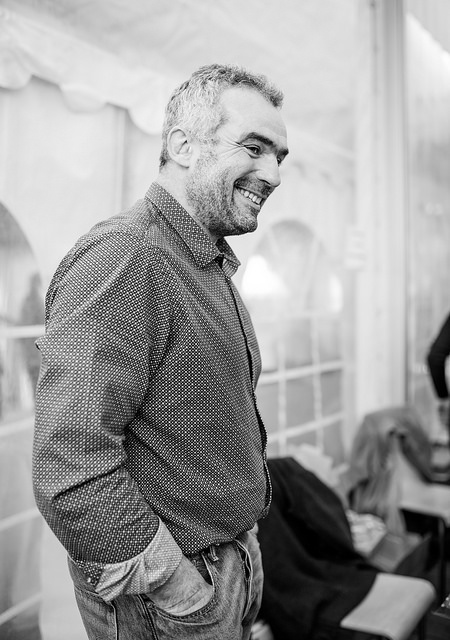 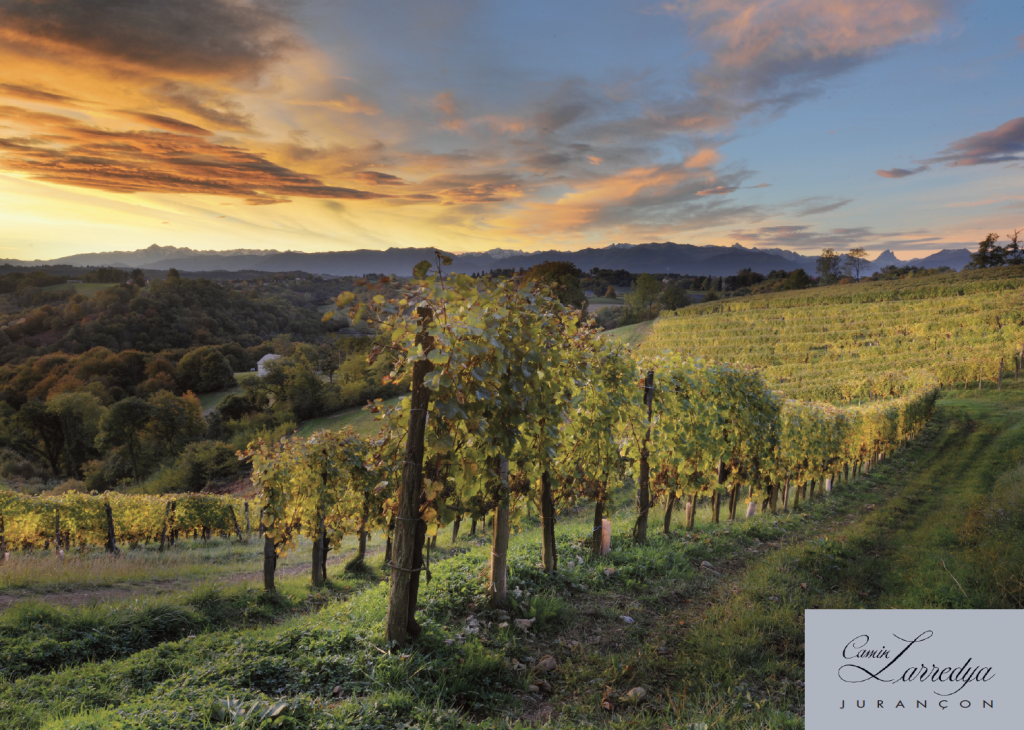 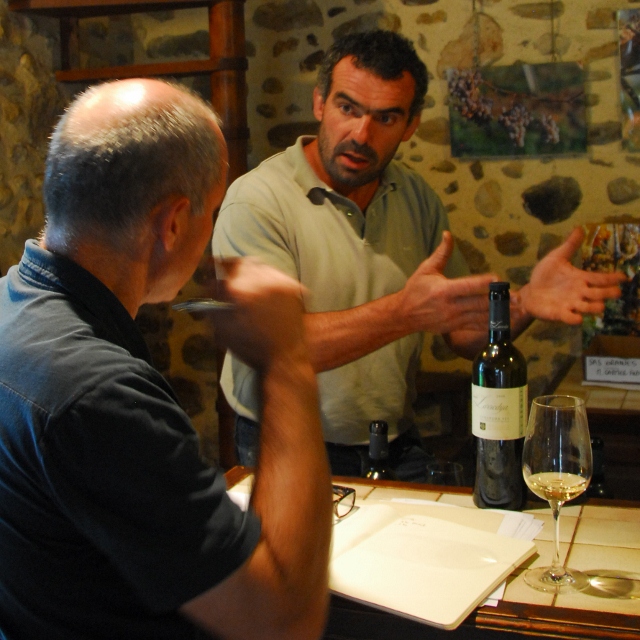 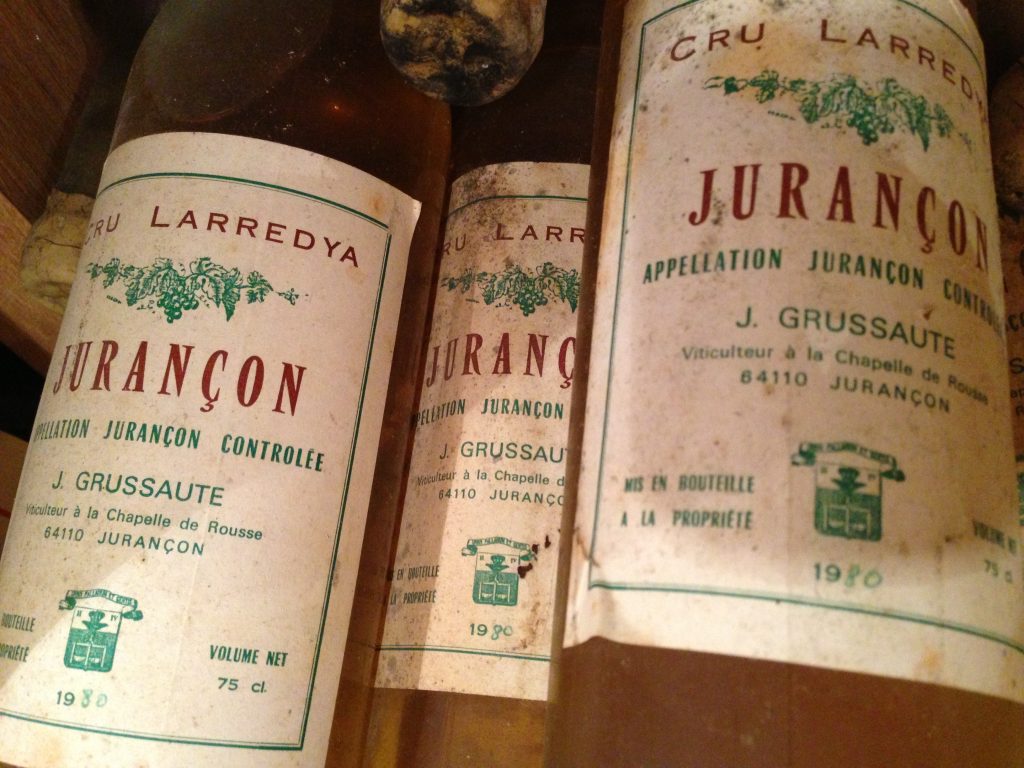 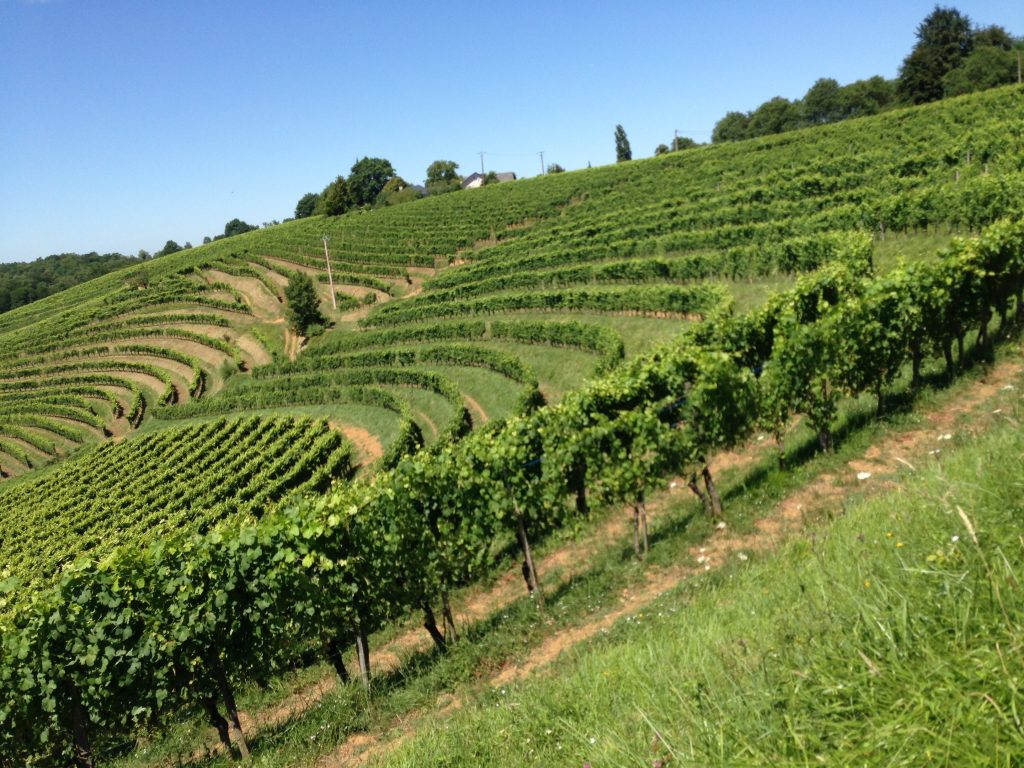 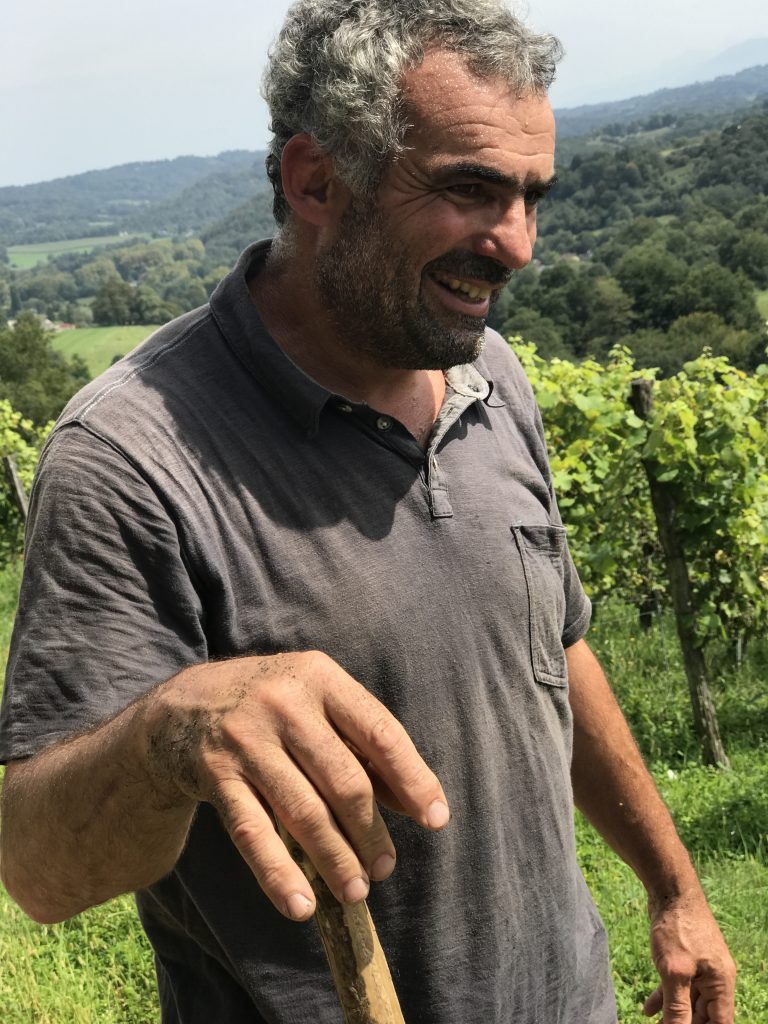 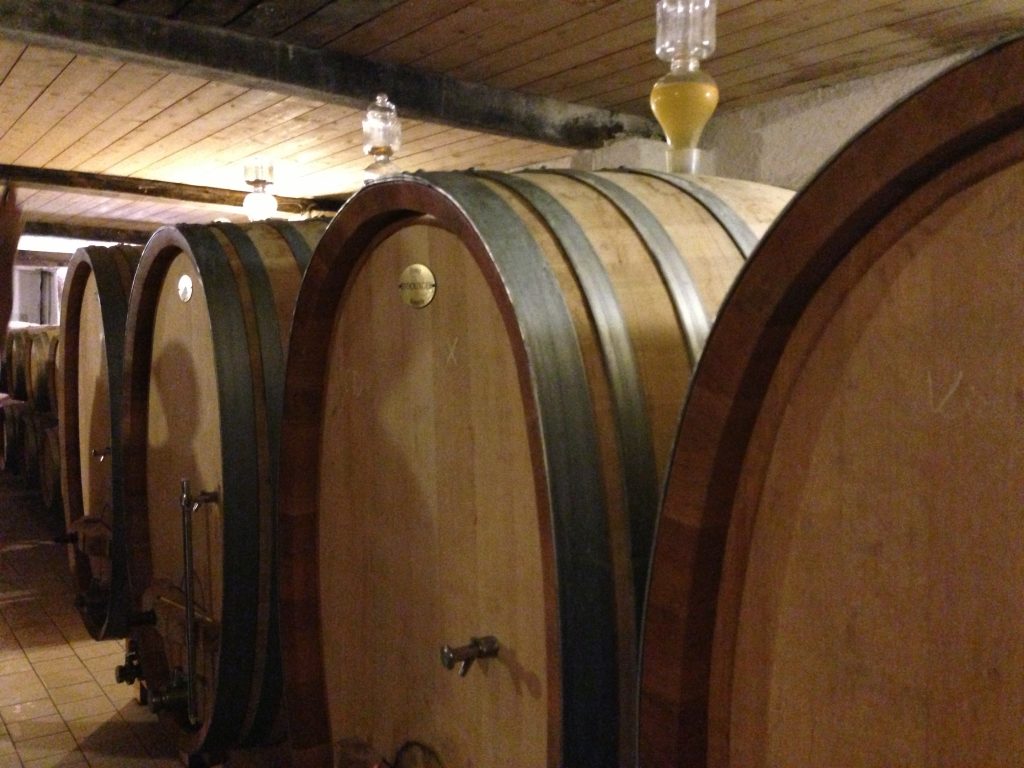 The Jurançon appellation is spread throughout the Bearnaise hills south of the city of Pau. Some 500 growers cultivate approximately 1,000 hectares of vineyards which are scattered throughout the steep slopes of this bucolic countryside in the Pyrénées. The appellation’s mandate is for white wine only, though a small amount of red wine is produced in the region and falls under the Bearn appellation. Historically, the wines of Jurançon were “moelleux”. Dry wines are a recent development, receiving a separate AOC in 1975 and requiring the word “sec” to be added on the label in conjunction with the name Jurançon. At present, Jurançon has approximately 60 producers of estate bottled wines.

Jean-Marc Grussaute and his mother, Jany, own a small but remarkable vineyard situated in the Chapelle de Rousse area of Jurançon. The family arrived at Larredya in the year 1900. At first, they raised cattle and planted fruit trees. A half century later they began cultivating strawberries as a commercial crop. In the 1970’s Jean Marc’s father, Jean, one of the region’s pioneers in re-establishing the wines of Jurancon, planted 4 hectares of vines along their terraced hillside. In 1983, Jean Grussaute passed away pre-maturely and Jean-Marc’s mother held together the estate until Jean-Marc arrived in 1988 at the age of 20 having just received his diploma from Bordeaux. Together, Jean-Marc and his mother have transformed their remote hillside vineyard into a world renowned wine estate. The vineyard, much of it planted by Jean-Marc’s father 50 years ago, is terraced and lies on steep and curved slopes that form an amphitheater. It is south facing with an amazing view of some of the highest peaks in the Pyrénées. The vineyard is planted to 65% Petit Manseng and 27% Gros Manseng and 8% Petit Courbu/Camarelet. Jean-Marc Grussaute began estate bottling in 1988 and in the years since, he has evolved both as a farmer and as a wine maker. He has farmed organically since 2007 with the first certified vintage being 2010. He also farms according to bio-dynamic principles and is certified by Demeter. Jean-Marc names his different cuvées in accord with the vineyard parcels from which they come. He is committed to using indigenous yeasts and minimal doses of SO2. 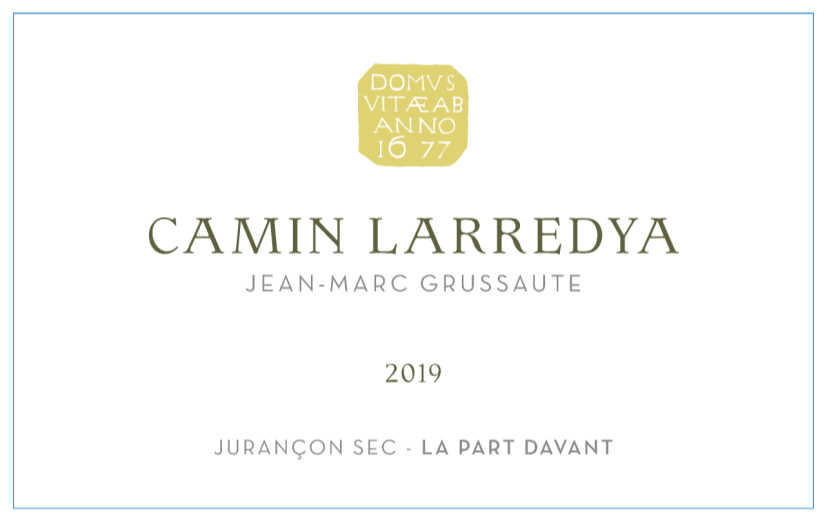 “La Part Davant" is a blend of 50% Gros Manseng, 35% Petit Manseng and 15% Petit Courbu.. The grapes are hand harvested and the whole bunches go directly into the press. The pressing is done extremely slowly and a single pressing can last 10 hours allowing the juice to have skin contact and exposure to oxygen. The pressed juice is fermented in wood, mostly in 2,500L foudres but with a small proportion in 225L barrels. The wine is matured “sur lie” for 6 months in the same foudres and barrels. Blending and bottling are done in the late spring at with 20mg/L of SO2 added before bottling. 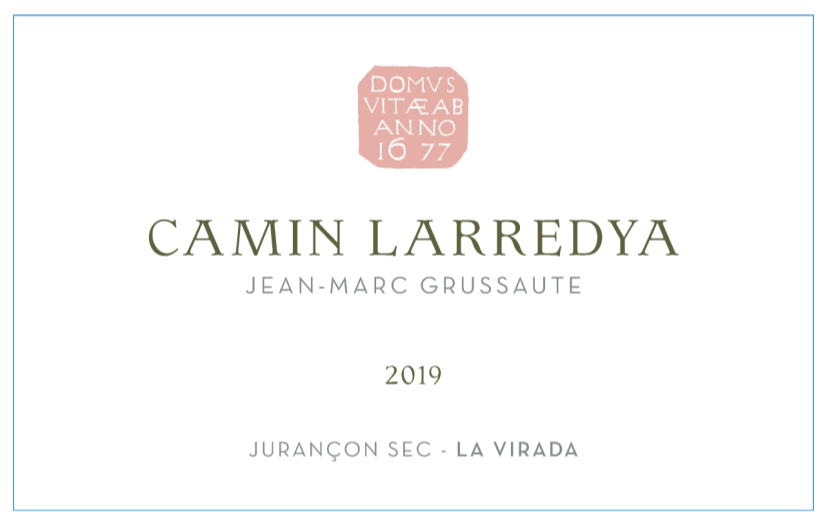 “La Virada” in local dialect means “The Valley”. In a valley at altitudes of 250 to 325 meters, Jean–Marc tends a vineyard composed of clay-silex soil topsoils over subsoils of weathered puddingstone (detric sedimentary galets formed by transport by river or along a shoreline). Planted to 40% Gros Menseng, 20% Petit Menseng, 20% Petit Corbu and 20% Carmelet, with an average age of 30 years. They are pruned in Guyot simple for the younger vines and Guyot double for the older vines. Yields are extremely low at 20 hl/ha. Harvests are made by hand in mid-October. Vinification is whole cluster, by direct pressure, with indigenous yeasts in 225L barrels (5% new) and in foudres of 1,200 to 2,500 L. It is temperature controled and there is no malolactic transformation. The wine spends 8 months on its lees, with lees stirring during the beginning months, then rests relatively dormant during summer. Production is 3,000 bottles. 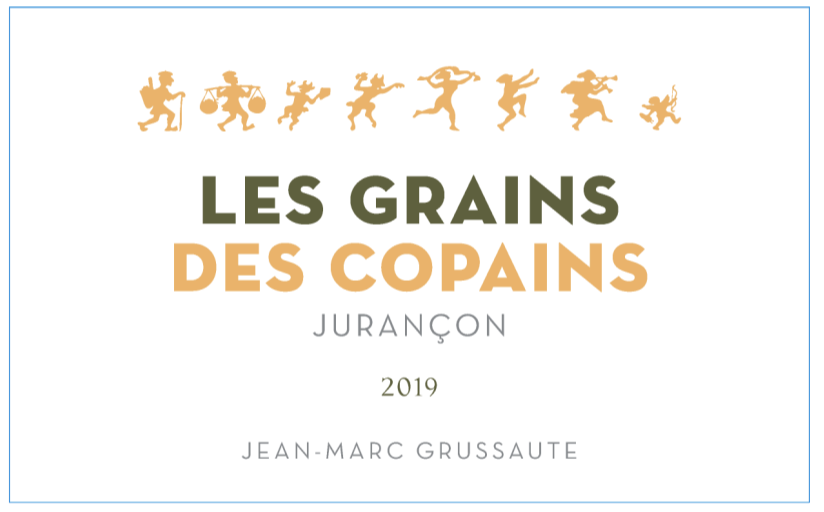 “Les Grains des Copains” is made from 100% Petit Manseng. The cuvée is produced from some terraced slopes behind the Grussaute home that Jean-Marc rents from his neighbors, thus, the name "les grains des copains" or "grapes from my friends." Les Grains des Copains is the Larredya cuvée that most closely resembles the traditional style of Jurançon. The grapes are harvested in October and November when they have started to wither on the vine. The grapes are hand harvested and the whole bunches go directly into the press. The pressing is done extremely slowly and a single pressing can last 10 hours allowing the juice to have skin contact and exposure to oxygen. The pressed juice is fermented in a variety of oak containers, 1,200L and 2,500L foudres and 225L barrels. The wine is matured “sur lie” in the same foudres and barrels for at least 6 months. The finished wine balances 13.5% alcohol with 60 grams of residual sugar. 20mg/L of SO2 is added before bottling. 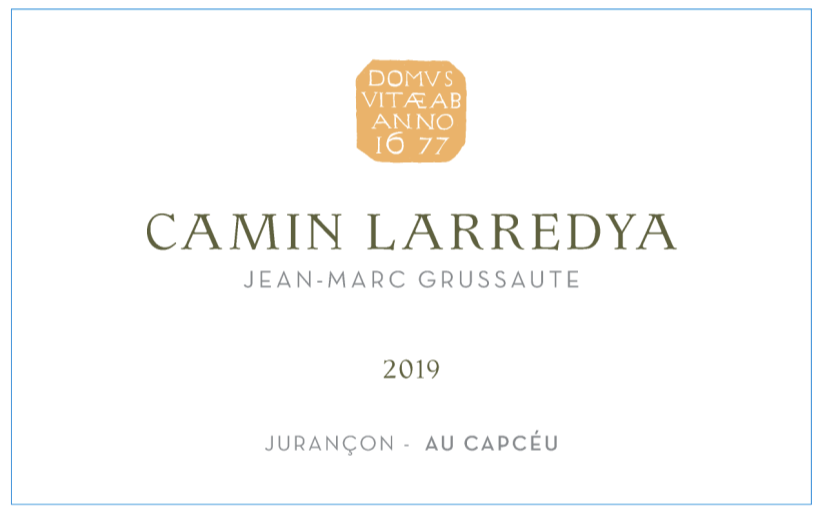 “Au Capceu” is made from 100% Petit Manseng. The grapes are selected from a few parcels along the summit of the hillside. Harvesting takes place in late November and sometimes later thanks to warm autumn winds from Spain. The harvest is done with successive pickings (“tries”) of the dried out grapes. There is no botrytis. The yields are between 15 and 25 hectoliters per hectare. The hand harvested grape bunches go directly into the press. The grapes are left in the press for three days to macerate and have exposure to oxygen. Jean-Marc adds a bit of his already fermented Jurancon Sec to the press to start fermentation and protect the grapes from too much oxididation. The wine is then fermented in 1,200L foudres and 225L barrels, a small proportion of which are new. The wine is matured “sur lie” for ten months in the same foudres and barrels. The finished wine balances 13.5% alcohol with 90 grams of residual sugar. 20mg/L of SO2 is added before bottling.

In a breathtaking landscape are the terraced vines of this Jurancon Domaine. Here Jean-Marc Grussaute organically crafts his expressive and sincere "sec and "moelleux" wines.

On these steep and abrupt terraces, the character and finesse of jurancon becomes exalted.

These are roughly translated experts from an article published in the latest La Revue du Vin de France.

The article is visually lovely and an intimate study of Jean-Marc Grussate and Camin Larredya, its landscape, the vineyards and process. A portrait of Jean-Marc as a Pur Jus Bearnais and a pioneering winemaker and a civic leader, adeptly, thoughtfully and cooperatively organizing to champion the cause of independent winemaking in Jurancon ; resisting the local cooperative and the bureaucratic barricade of politicized regulations......working in a collective w/ other young jurancon winemakers who have come to establish a local redefining of the "organic" model of winemaking - so harsh are the conditions of their growing environment ..........making wines that are the true face of Jurancon today.