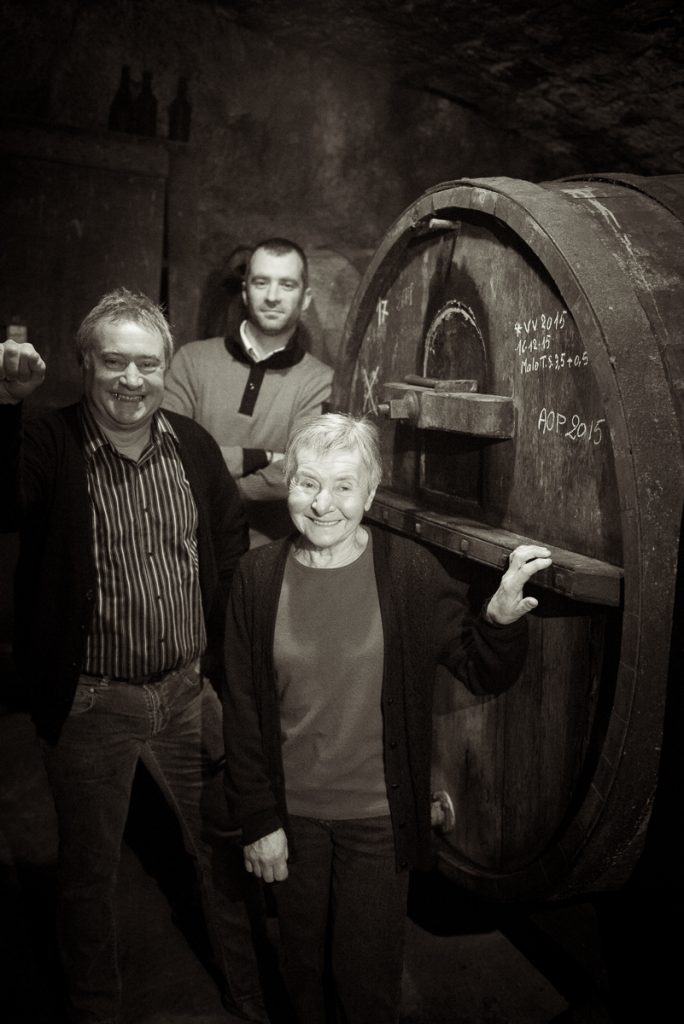 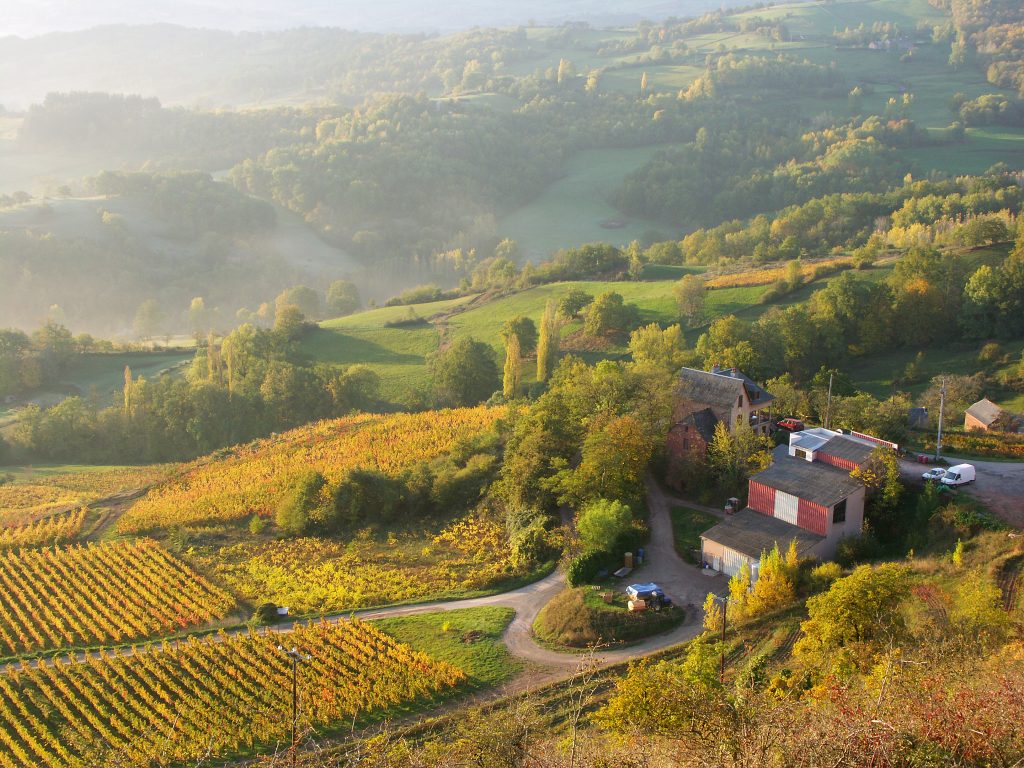 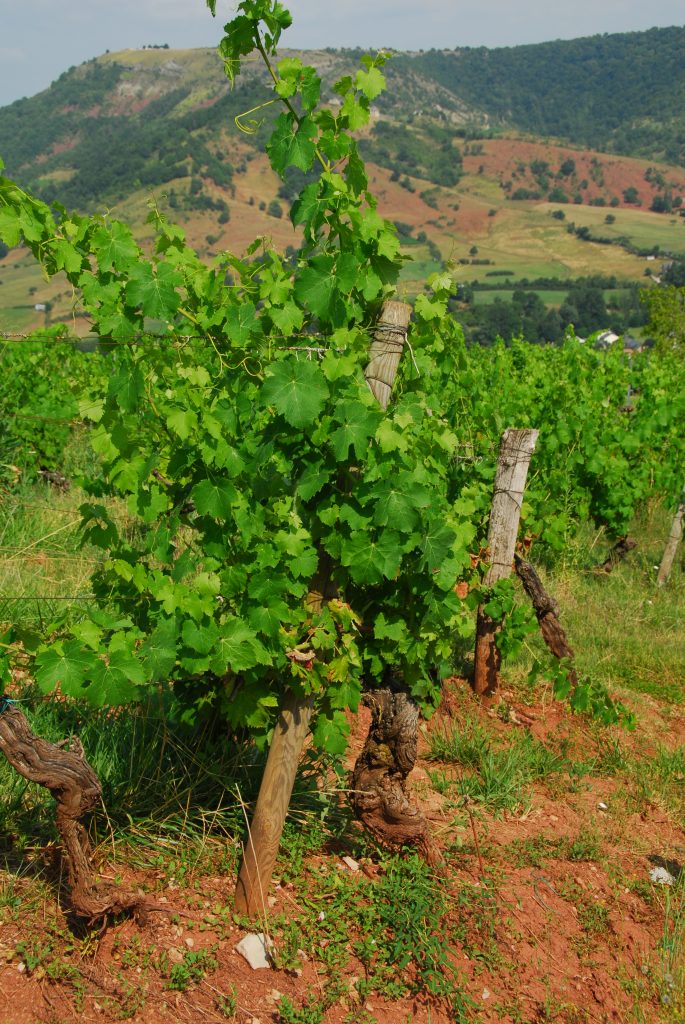 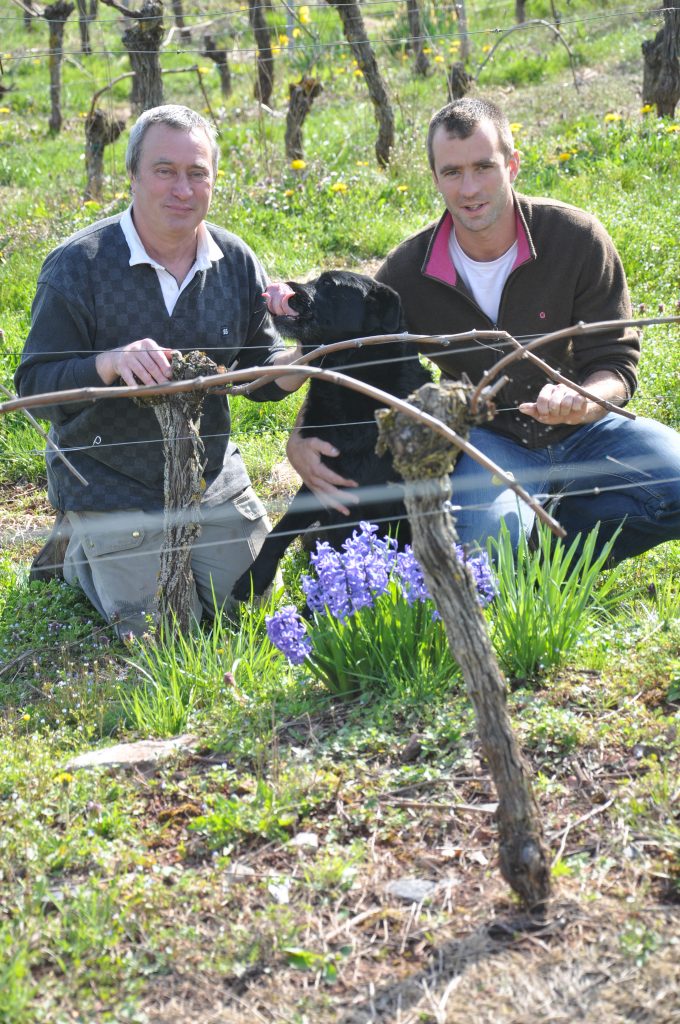 The appellation of Marcillac is located in the western part of the Auvergne, nestled in the mountain range known as the Massif Central. The vineyards lie along steep slopes in a remote valley that offers a beneficial micro-climate. The valley draws warm and dry air from the Mediterranean during the summer and fall while also sheltering the vineyards from the harsh winters. The history of the vineyards is closely aligned with the Abbaye at Conques whose monks recognized the valley’s potential and planted vineyards in the area beginning in the 10th century. Centuries later, it was the bourgeoisie from the nearby city of Rodez who took an interest in the vineyards. These city folks greatly expanded the vineyards and built themselves summer homes in the surrounding villages. The devastating effect of phyloxerra at the end of the 19th century and the economic problems of the early 20th century led to the great abandonment of the vineyards. During this period, the region steadily depopulated with many “Auvergnats” going to Paris and finding work in the restaurant trade. Over time, many of them opened their own bistros which became an important customer base for the farmers back home who were reconstituting the Marcillac vineyards. The local grape of the area is Fer Servadou, called locally, Mansois. In the local dialect, Occitan, it was called Saoumences, which is interesting because of the last part of the name being similar to Mencia, or the Spanish name for Cabernet Franc. In fact, the Cabernet Franc and Fer Servadou are both part of the Carmenere family of grape varieties. There is some speculation that because the Abbaye of Conques was an offshoot of the Abbaye at Cluny, the 10th century vineyards were probably planted with Pinot Noir.

Domaine du Cros, with its 33 hectares, is the largest independent producer in the appellation and Philippe Teulier and his family have been instrumental in reestablishing the reputation of Marcillac’s wines. Philippe Teulier’s vines lie at elevations as high as 450 meters on a few different hillsides that surround the village of Clairvaux. Much of his vineyard is terraced and the soil is an iron rich clay known locally as “rougier” with outcroppings of limestone. His wines are made from one grape type, the local grape of Marcillac, Fer Servadou. 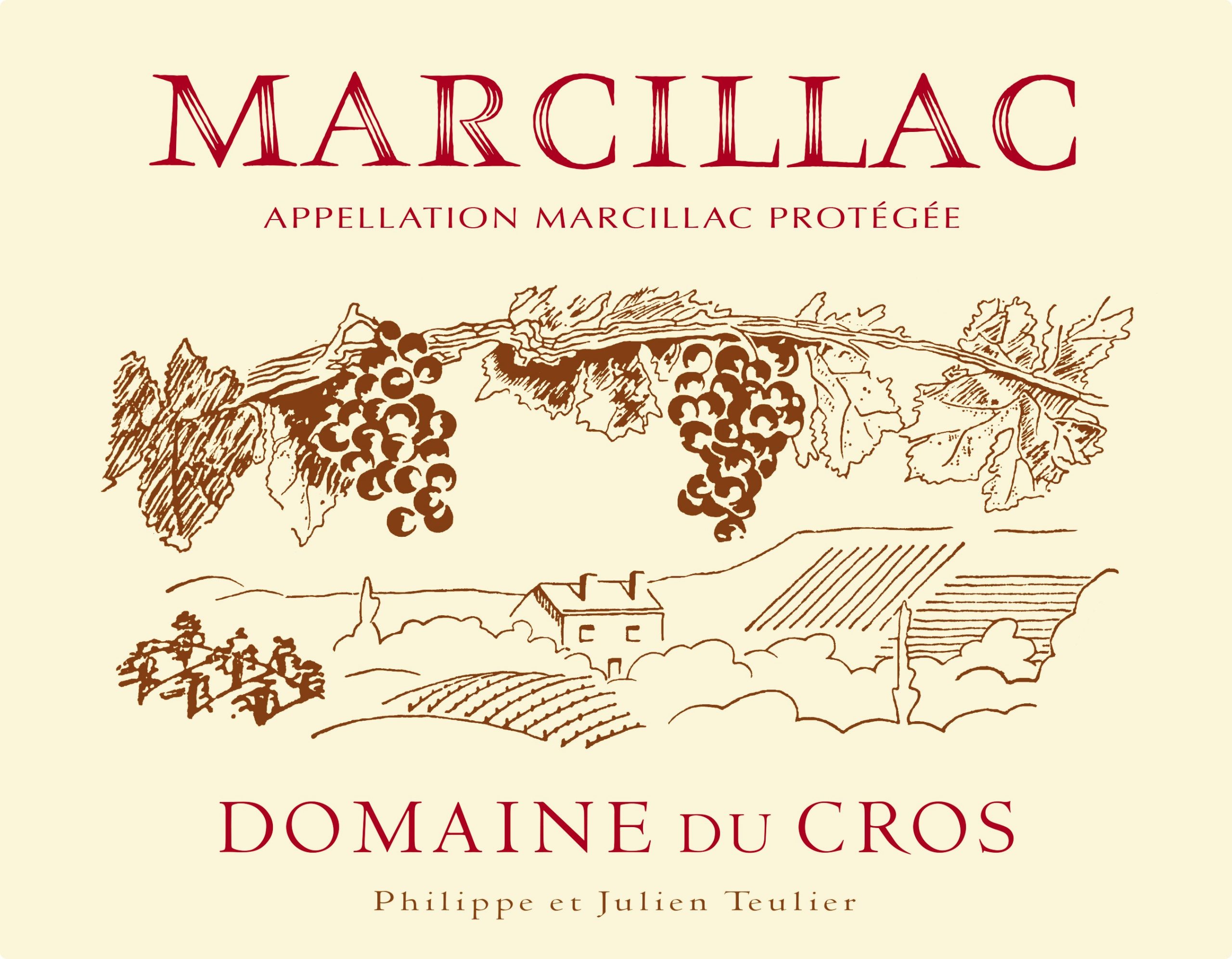 “Lo Sang del Pais” translates as “the blood of the countryside” and one can easily feel the life-force of this wine. The grape bunches are hand harvested and after being de-stemmed they are fed into fermentation tanks using gravity flow. The “cuvaison” lasts 21 days with the juice being pumped over the cap during the first 6 days. The wine is aged for 6 months in large oak and chestnut barrels which range in age up to 200 years old. The wine has a bright violet color and aromas of wild red fruit and pepper which follow through on the palate with freshness and vibrancy. 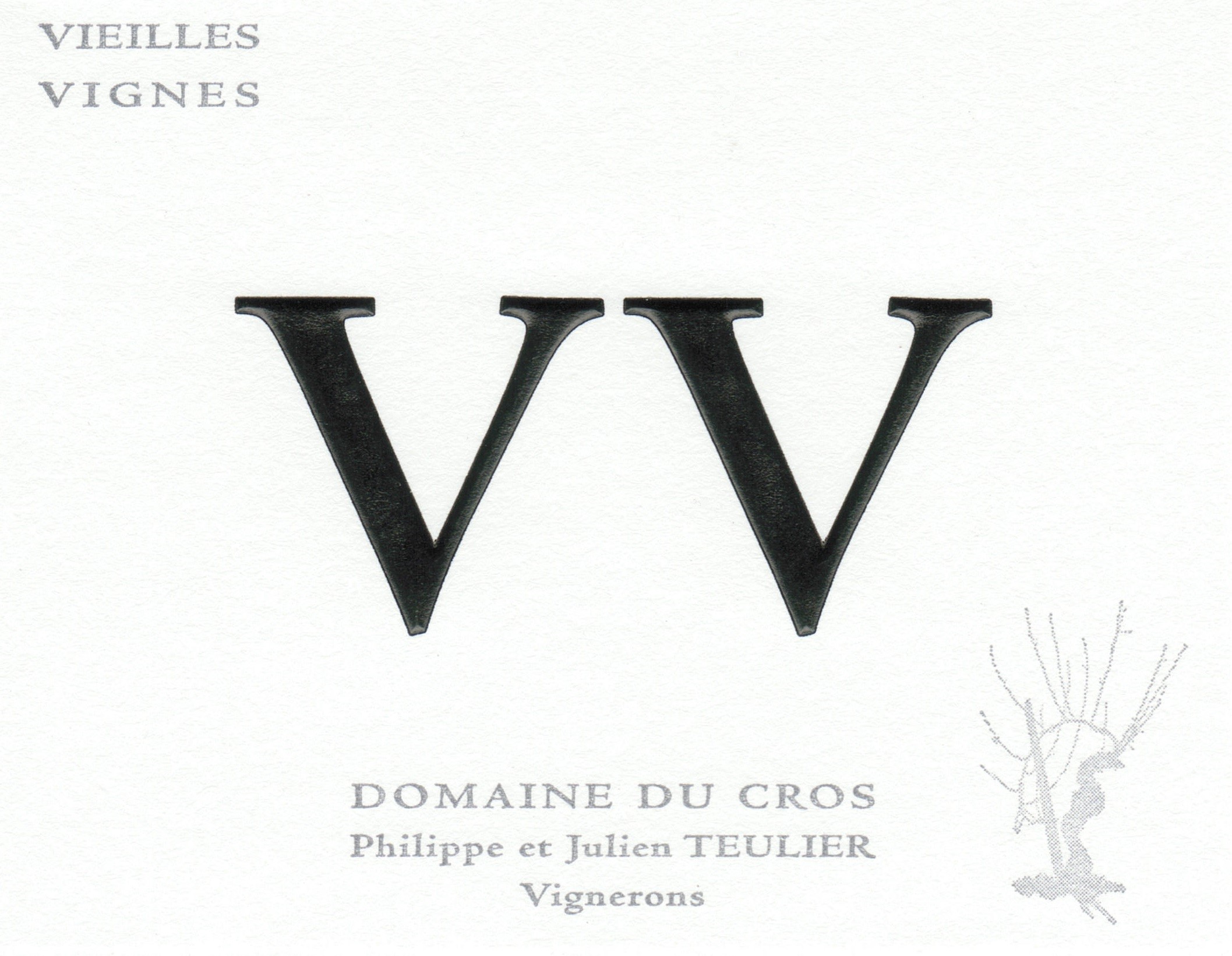 The Cuvée Vieilles Vignes is made from a few parcels of vines that average over 80 years of age. The parcels are mostly on the upper elevation slopes with limestone soil. The fermentation is carried out at a slightly warmer temperature than the regular cuvee and the maceration is extended to 5 weeks. The wine is aged in large oak and chestnut barrels for at least a year before bottling. The “Vieilles Vignes” has added weight and breadth on the palate and benefits from at least 3 to 5 years of bottle age.

Domaine du Cros produces a small amount of “Lo Sang del Pais” Rosé almost every year. The wine is basically a rosé version of the red wine. The grape bunches are hand harvested and after being de-stemmed they are fed into fermentation tanks using gravity flow. After a day or two, some free run juice is drawn from several different tanks and assembled into a stainless-steel tank to ferment at a low temperature. The wine remains in tank until March/April when it is bottled. It has a remarkably vibrant and bright color and aromas that are reminiscent of the red wine with red fruits enhanced by iron and pepper.